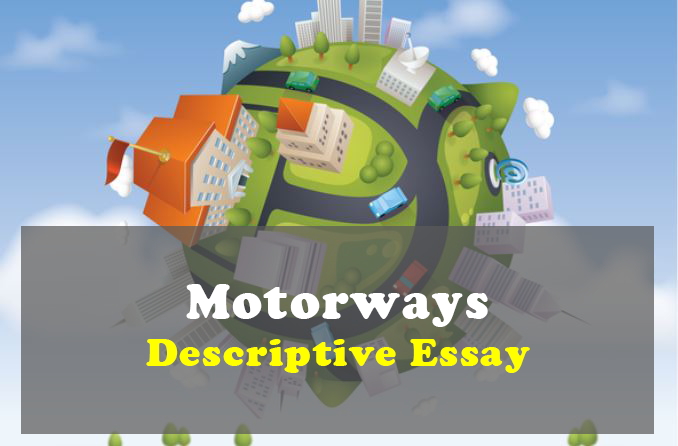 ‘Motorway’ is the name now given to the very wide roads built all over Europe which connect the major cities, but which also by-pass all of them. The idea for the construction of these vast “roads” cam originally from the German “autobahns,” designed before the war, in order to move troops quickly from one end of Germany tot he other. Further back in time than this, the idea stems from the old Roman roads (like the famous “Watling Street” and “Foss-Way” in England); which were designed for the same purpose. In Italy “Autostrades” have been constructed. In Britain, the idea had been taken up since the last war at vast national cost and the new motorways are called ‘M’s. They are numbered as for example the M.I. which connect London with Birmingham. The British system of motorways is not yet complete. In Singapore the pan-island expressway with three land double track bear resemblance to the motorways of the west.

A motorway is different in many ways from an ordinary road. It has a three way doubled track. Three lanes, in fact, each one of which has a different speed limit. There are lanes for the fast-moving traffic, for the slower traffic and for overtaking. No cyclists, pedestrians or learner drivers are allowed on these roads. No minor road cross the motorways; as for this purpose there are flyover and tunnels. All “feeding” roads merge from the left. There is along their whole stretch “no waiting”, “no parking”, and no “U-turns”. For drivers who need rest and refreshment on their journey, there are controlled and spaced cafes, petrol stations, toilets facilities and lay-by.

The beneficial effects of a well-constructed and planned motorway system are at once apparent. Since their object is to ensure a continuous flow of swiftly moving traffic which avoids the congestion of large towns, much time is saved on long journeys. How much was wasted before, in long and tedious hold-ups in the narrow roads of major cities ! Petrol too, as a result of this, is saved and a general economy in transport ensues. Minor roads and hitherto major roads are freed, at it is only the traffic going to the relevant town which uses these. The cars which before would have been over-crowding these roads just to pass through the town, are now on the motorway.

But, like any new innovation, the motorway brings harmful effects with it as well. The engines of small cars tend to become accidents too occur. These are caused by glare or by drivers misjudging speed when they re-enter minor roads. Sudden storm, oil and ice-patches make these roads very slippery and this, at fast speed, is highly dangerous. Long uninterrupted driving on monotonous roads which are almost completely straight, causes drivers to fall asleep. it is, in fact, possible to ‘sleep’ at the wheel.

Trade in towns, which because of the motorways are now by pass, is also affected. A pause for a rest and meal, which before was often made in a town, usually means a certain amount of shopping as well. Now rest and refreshment are taken at the motorway restaurants and the shopping wants delay until the final destination is reached. Consequently, shops of all kinds, petrol station, cafes and so on, in many towns have lost trade. The livelihood of certain inns and wayside cafes on minor roads has, in some cases, been lost altogether.

The motorway, however, with both its advantages and disadvantages has come o stay. It is the only answer to modern traffic conditions in countries where long distances have to be covered, especially through vast industrial areas. If its final effects are to be completely beneficial, then the problems which it causes must be solved at the same rate as they are created.