Q. 3. What were the limitations of Newlands’ Law of Octaves?
Answer
Limitations of Newlands’ law of octaves:
→ It was not applicable throughout the arrangements. It was applicable up to calcium only. The properties of the elements listed after calcium showed no resemblance to the properties of the elements above them.
→ Those elements which were discovered after Newlands’ octaves did not follow the law of octaves.
→ The position of cobalt and nickel in the group of the elements (F, Cl) of different properties could not be explained.
→ Placing of iron far away from cobalt and nickel, which have similar properties as iron, could also not be explained.

Q. 2. Besides gallium, which other elements have since been discovered that were left by Mendeleev in his Periodic Table? (any two)
Answer
Scandium and germanium.

Q. 3. What were the criteria used by Mendeleev in creating his Periodic Table?
Answer
Mendeleev’s periodic table was based on the observation that the properties of elements are a periodic function of their atomic masses. This means that if elements are arranged in the increasing order of their atomic masses, then their properties get repeated after regular intervals.

Q. 4. (a) Lithium, sodium, potassium are all metals that react with water to liberate hydrogen gas. Is there any similarity in the atoms of these elements?
(b) Helium is an unreactive gas and neon is a gas of extremely low reactivity. What, if anything, do their atoms have in common?
Answer
(a) Yes. The atoms of all the three elements lithium, sodium, and potassium have one electron in their outermost shells.
(b) Both helium (He) and neon (Ne) have filled outermost shells. Helium has a duplet in its K shell, while neon has an octet in its L shell.

Q. 6. By considering their position in the Periodic Table, which one of the following elements would you expect to have maximum metallic characteristic?
Ga Ge As Se Be
Answer
Since Be lies to the extreme left-hand side of the periodic table, Be is the most metallic among the given elements. 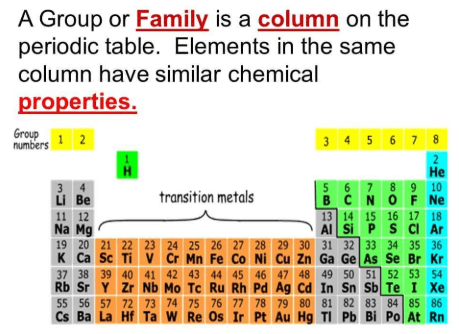 Page No: 92
Q. 6. The position of three elements A, B and C in the Periodic Table are shown below –

(a) State whether A is a metal or non-metal.
(b) State whether C is more reactive or less reactive than A.
(c) Will C be larger or smaller in size than B?
(d) Which type of ion, cation or anion, will be formed by element A?
Answer
(a) A is a non-metal.
(b) C is less reactive than A, as reactivity decreases down the group in halogens.
(c) C will be smaller in size than B as moving across a period, the nuclear charge increases and therefore, electrons come closer to the nucleus.
(d) A will form an anion as it accepts an electron to complete its octet.

Q. 7. Nitrogen (atomic number 7) and phosphorus (atomic number 15) belong to group 15 of the Periodic Table. Write the electronic configuration of these two elements. Which of these will be more electronegative? Why?
Answer
Nitrogen (7): 2, 5
Phosphorus (15): 2, 8, 5
Nitrogen is more electronegative than phosphorus. On moving down a group, the number of shells increases. Therefore, the valence electrons move away from the nucleus and the effective nuclear charge decreases. This causes the decrease in the tendency to attract electrons and hence electronegativity decreases.

Q. 8. How does the electronic configuration of an atom relate to its position in the Modern Periodic Table?
Answer
In the modern periodic table, atoms with similar electronic configurations are placed in the same column. In a group, the number of valence electrons remains the same.
Elements across a period show an increase in the number of valence electrons.

How we arrange lots of stuff kept in our room? If its messy, it is difficult to find out anything. If it is arranged properly, for example books of same subjects are kept systematically it will be easier to find required books when needed at times. Similarly, if elements with similar properties are arranged accordingly it will be easier to study about them. That is done in this fifth chapter-The arrangement of elements in the periodic table. The chapter contains history of development of the periodic table. The attempts to develop the periodic table are discussed. Why such models failed?, that is also studied in the chapter. After that we will describe the modern periodic table in detail. The related chemical and physical properties are discussed in accordance with modern periodic table. Questions can be asked from previous models like dobereiner triads, Newlands Octave and Mendeleev’s model, about their logic and drawbacks. From modern periodic table, questions can be asked about its concept and trends of physical properties.