In-Text Questions Page No: 40
Ques 1. Give an example of a metal which
(i) is a liquid at room temperature.
(ii) can be easily cut with a knife.
(iii) is the best conductor of heat.
(iv) is a poor conductor of heat.

Ques 2. Explain the meanings of malleable and ductile.

Malleable: Substances that can be beaten into thin sheets are called malleable. Most of the metals are malleable. The most malleable metals are gold and silver.

Ductile: Substances that can be drawn into thin wires are called ductile. Most of the metals are ductile. Platinum, gold and silver are the most ductile metals.

Page no: 46
Ques 1. Why is sodium kept immersed in kerosene oil?

Sodium is a very reactive metal and combines explosively with air(oxygen) at room temperature. It also reacts violently with cold water: Hence, it catches fire if kept in open. Therefore, to prevent accidental fires and accidents, sodium is stored immersed in kerosene oil.

Ques 3. Samples of four metals A, B, C and D were taken and added to the following solution one by one. The results obtained have been tabulated as follows.

Use the table above to answer the following questions about metals A, B, C and D.
(i) Which is the most reactive metal?
(ii) What would you observe if B is added to a solution of copper (II) sulphate?
(iii) Arrange the metals A, B, C and D in the order of decreasing reactivity.

A + CuSO4 → Displacement, i.e. A is more reactive than copper.

B + FeSO4 → Displacement i.e. B is more reactive than iron.

D + FeSO4/CuSO4/ZnSO4/AgNO3 → No reaction, i.e. D is less reactive than iron, copper, zinc, and silver.
From the above equations, we obtain:
(i) B is the most reactive metal.
(ii) If B is added to a solution of copper (II) sulphate, then it would displace copper.

(iii) The arrangement of the metals in the order of decreasing reactivity is:
B > A > C > D

Ques 4. Which gas is produced when diluted hydrochloric acid is added to a reactive metal? Write the chemical reaction when iron reacts with dilute H2SO4.

When dilute hydrochloric acid is added to a reactive metal, hydrogen gas is evolved.

The reaction between iron and H2SO4 is:

Ques 5. What would you observe when zinc is added to a solution of iron (II) sulphate? Write the chemical reaction that takes place.

Zinc is more reactive than iron. Therefore, if zinc is added to a solution of iron (II) sulphate, then it would displace iron from the solution.

Page No: 49
Ques 1. (i) Write the electron-dot structures for sodium, oxygen and magnesium.
(ii) Show the formation of Na2O and MgO by the transfer of electrons.
(iii) What are the ions present in these compounds? 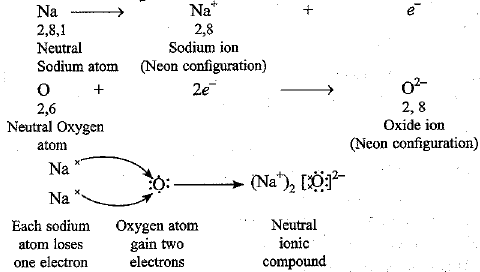 (b) Formation of MgO

Ques 2. Why do ionic compounds have high melting points?

Ionic compounds have high melting points because of the strong force of attraction between the oppositely charged ions. High energy is required to break the metallic bonds between these ions.

(i) Mineral: The natural materials in which metals occur in the form of their compounds are called minerals. They are mostly found in earth’s crust. Some minerals are also found in seawater, e.g., NaCl (sodium chloride), feldspar, mica, kaolin, etc.

(ii) Ore: They are minerals from which metals are extracted profitably, e.g., hematite (Fe2O3) is an ore of iron, bauxite (Al2O 3.2H2O ) is an ore of aluminium.

(iii) Gangue: The unwanted material present in the ores mined from the earth is called gangue. It needs to be removed prior to the extraction process.

Ques 2. Name two metals which are found in nature in the free state.

The metals at the bottom of the reactivity series are mostly found in a free state. For example gold, silver, and platinum.

Ques 3. What chemical process is used for obtaining a metal from its oxide?

The chemical process used for obtaining a metal from its oxide is reduction.

There are mainly three different methods of reduction:
(i) By heating
(ii) By using carbon
(iii) By using aluminium, calcium, sodium etc. as reducing agents.

Page No: 55
Ques 1. Metallic oxides of zinc, magnesium and copper were heated with the following metals.

In which cases will you find displacement reactions taking place?

Ques 2. Which metals do not corrode easily?

More reactive a metal is, more likely it is to be corroded. Therefore, less reactive metals are less likely to get corroded. This is why gold plating provides high resistance to corrosion. eg. gold, platinum.

Ques 3. What are alloys?

Alloys are homogeneous mixtures of two or more elements. The elements could be two metals, or a metal and a non-metal. An alloy is formed by first melting the metal and then dissolving the other elements in it. For example, steel is an alloy of iron and carbon.

Ques 2. Which of the following methods is suitable for preventing an iron frying pan from rusting?
(a) Applying grease
(b) Applying paint
(c) Applying a coating of zinc
(d) all of the above

Ques 3. An element reacts with oxygen to give a compound with a high melting point. This compound is also soluble in water. The element is likely to be
(a) calcium
(b) carbon
(c) silicon
(d) iron

(a) Calcium oxide has a high melting point as it is ionic in nature and is soluble in water.

(c) Zinc is more reactive than tin, that is why tin is used.

(b) These two tests can be used to distinguish between metals and non-metals. Hammering can be used in most of metals except in case of sodium, potassium and lithium.

Conduction of electricity can be used in classification of most of the metals and non- metals except in graphite which is a non-metallic conductor.

Page No: 57
Ques 8. In the electrolytic refining of a metal M, what would you take as the anode, the cathode and the electrolyte?

Ques 9. Pratyush took sulphur powder on a spatula and heated it. He collected the gas evolved by inverting a test tube over it, as shown in figure below. 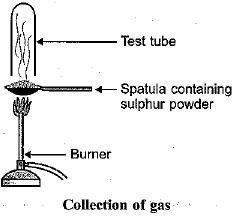 (a) What will be the action of gas on
(i) dry litmus paper?
(ii) moist litmus paper?
(b) Write a balanced chemical equation for the reaction taking place.

(a) (i) There will be no action on dry litmus paper.
(ii) The colour of litmus paper will turn red because sulphur is a non-metal and the oxides of non-metal are acidic in nature.
(b)

Ques 10. State two ways to prevent the rusting of iron.

Two ways to prevent the rusting of iron are:
(i) Painting: Iron articles are painted so that surface does not come in contact with air and water and it does not get rusted.
(ii) Galvanisation: It is a process in which iron particles are coated with zinc metal so as to prevent them from rusting. Zinc is more reactive than iron, therefore, it loses electrons more readily and prevents iron from rusting.

Ques 11. What type of oxides are formed when non-metals combine with oxygen?

Mostly acidic oxides are formed when non-metal combines with oxygen.

Ques 12. Give reasons
(a) Platinum, gold and silver are used to make jewellery.
(b) Sodium, potassium and lithium are stored under oil.
(c) Aluminium is a highly reactive metal, yet it is used to make utensils for cooking.
(d) Carbonate and sulphide ores are usually converted into oxides during the process of extraction.

(a) Platinum, gold, and silver are used to make jewellery because they are very lustrous. Also, they are very less reactive and do not corrode easily.

(b) Sodium, potassium, and lithium are very reactive metals and react very vigorously with air as well as water. Therefore, they are kept immersed in kerosene oil in order to prevent their contact with air and moisture.

(c) Though aluminium is a highly reactive metal, it is resistant to corrosion. This is because aluminium reacts with oxygen present in air to form a thin layer of aluminium oxide. This oxide layer is very stable and prevents further reaction of aluminium with oxygen. Also, it is light in weight and a good conductor of heat. Hence, it is used to make cooking utensils.

(d) Carbonate and sulphide ores are usually converted into oxides during the process of extraction because metals can be easily extracted from their oxides rather than from their carbonates and sulphides.

Ques 13. You must have seen tarnished copper vessels being cleaned with lemon or tamarind juice. Explain why these sour substances are effective in cleaning the vessels.

Ques 14. Differentiate between metal and non-metal on the basis of their chemical properties.

Ques 15. A man went door to door posing as a goldsmith. He promised to bring back the glitter of old and dull gold ornaments. An unsuspecting lady gave a set of gold bangles to him which he dipped in a particular solution. The bangles sparkled like new but their weight was reduced drastically. The lady was upset but after a futile argument, the man beat a hasty retreat. Can you play the detective to find out the nature of the solution he had used?

The solution he had used was aqua regia, which is a freshly prepared mixture of concentrated hydrochloric acid and concentrated nitric acid in the ratio 3:1. Aqua regia is one of the few reagents that are able to dissolve gold. When the person claimed to be goldsmith dipped bangles in aqua regia, some of the gold got dissolved and hence the weight of the bangles got reduced.

Ques 16. Give reasons why copper is used to making hot water tanks and not steel (an alloy of iron).

Metals and Non-Metals is the third chapter of class 10 Science NCERT textbook. The chapter starts with comparison of physical properties of Metals and Non-Metals. Further, it is discussed that there are many exceptions in physical properties of metals and non-metals. For example, Mercury metal is liquid at room temperature, iodine, a non-metal have shiny appearance. Thus, It is important to look at chemical side of metals. The reactions of metals are discussed with water, oxygen, acids and other metal salts. The reactions take place by the formation of ionic bonds and ion formation. Lewis structure and electronic configuration, both are important to understand all these concepts. Occurrence of metals in the environment is disused. Metals are obtained from ore by various processes depending on the reactivity of metals. Such methods are discussed with suitable chemical reactions. Corrosion of metal is discussed. How to prevent metals from getting corroded is also studied. One of such method is alloying. Here, metals are mixed with other metals and non-metals. Alloys are good for strength of metals and non-metals. Different types of alloys are explained with their composition and uses. Analytical and theoretical questions are asked on all these concepts and examples of chemical reactions and equations mentioned in the chapter.