Q 1: If a trait A exists in 10% of a population of an asexually reproducing species and a trait B exists in 60% of the same population, which trait is likely to have arisen earlier?

Q 2: How does the creation of variations in a species promote its survival?

Short answer: Variations bring about favourable changes in an organism that allow it to survive better than others in the population.

Sometimes there occur changes in the environment that are so drastic that they make survival for certain organisms very difficult. For example, let us assume that a group of beetles can only survive upto 50 degrees celcius of temperature, but there are few beetles in the population with a variation that allows them to withstand or tolerate higher temperature. So, if the temperature rises all those beetles that could only survive upto 50 degrees of temperature would die off. Those beetles that could tolerate the higher temperature would survive and reproduce. Note: Keep in mind that not all variations are necessarily useful. It depends on the extrenal environment.

Q 1: How do Mendel’s experiments show that traits may be dominant or recessive? 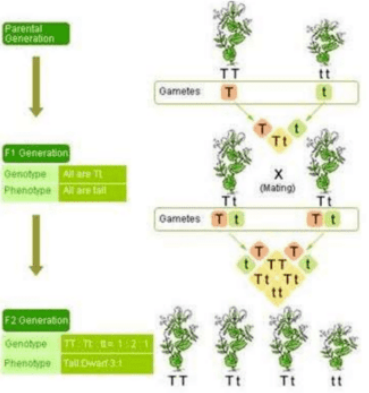 Q 2: How do Mendel’s experiments show that traits are inherited independently? 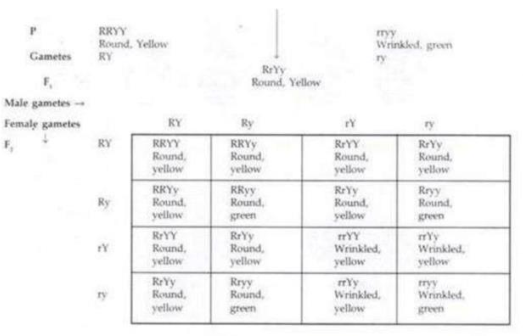 Case 2: Blood group A in father if has recessive genotype IAIA and mother has dominant genotype IAIO or IOIO.

Q 4: How is the sex of the child determined in human beings?

Q 1: What are the different ways in which individuals with a particular trait may increase in a population?

Q 2: Why is the traits acquired during the life-time of an individual not inherited?

A trait can be only inherited when it brings a change in genes present in the gametes of an organism. Changes in non-reproductive tissues cannot be passed on to DNA of germ cells. Therefore traits acquired during lifetime of an individual are not inherited by the offspring because they are changes in somatic cells and not in germ cells.

Q 3: Why are the small numbers of surviving tigers a cause of worry from the point of view of genetics?

Small numbers of surviving tigers are a cause of worry from the point of view of genetics because if all the tigers in the world die and become extinct, their genes will be lost forever, they will not come into sight ever again if they become extinct.

Q 1: What factors could lead to the rise of a new species?

Various factors that could lead to formation of new species are Geographical barrier, natural selection, genetic drift, and variations.

Q 2: Will geographical isolation be a major factor in the speciation of a self-pollinating plant species? Why or why not?

No, geographical isolation will not be a major factor in the speciation of a self-pollinating species because self-pollinating plants do not require any other plant to reproduce. Hence, No new gene variants will be introduced into the population and thus there will be no evolution of new species.

Q 3: Will geographical isolation be a major factor in the speciation of an organism that reproduces asexually? Why or why not?

Q 1: Give an example of the characteristics being used to determine how close two species are in evolutionary terms.

If different organisms have common ancestors then it is possible that they have similar characteristics due to inheritance. These similarities are used to determine their close relations in evolutionary terms. For example – forelimbs of bird and forelimb of humans have similar basic structure of bones which suggests that they have a common ancestor i.e. they are closely related in evolutionary terms. Over time these structures have developed to function as per the requirement. Thus homologous organs help in determining closeness in evolution.

Q 3: What are fossils? What do they tell us about the process of evolution?

Fossils are the dead remains of plants and animals which undergo several physical and chemical processes after they are dead.

Example- Archaeopteryx lithographica is a fossil that resembles a bird (has feathers and wings) but has several features of reptiles (tail and teeth). So Archaeopteryx is supposed to be the connecting link between ave and reptiles thus suggesting that birds have evolved from reptiles.

Q 1: Why are human beings who look so different from each other in terms of size, color and looks said to belong to the same species?

This is because human beings reproduce. There are no geographical barriers so they interbreed easily and produce viable offspring. It is the result of variations that human beings look different from each other in terms of size, color and looks.

Q 2: In evolutionary terms can we say which among bacteria, spiders, fish and chimpanzees have a ‘better’ body design? Why or why not?

Bacteria has a better body design in evolutionary terms because they can survive hot springs, deep sea and even freezing environment which most of the other organisms cannot.

This suggests that the genetic make-up of the tall parent can be depicted as:

Give reason for your choice.

The parent should have dominant genes for violet flower color to be inherited by the progeny, so WW must be gene pair.

For height, the parent should have one recessive gene and one dominant for height in it, so Tt must be the genes in parent plant. Thus TtWW is the genetic make-up of the parent in order so that the progeny should have short violet flowers.

Q 2: An example of homologous organs is:

Homologous organs are those which have a common ancestor but have evolved differently and adapted suitable functions according to their needs. Our arm and dog’s foreleg has the basic structure of bones but they have different functions, a dog uses it for walking while human beings use it for holding/ grasping.

Our teeth and elephant’s tusks again have same structure but they serve different functions. Likewise, potatoes and runners of grass, both grow underground but they have different uses, potatoes serve as food whereas grass as vegetation.

Q 3: In evolutionary terms, we have more in common with:

Human beings belong to same species and the variations that are seen are usually less among same species, than compared between different species.

On this basis, can we say anything about whether the light eye color trait is dominant or recessive? Why or why not?

Classification involves grouping of organism into a formal system based on similarities in internal &external structure/ evolutionary history. Two species are said to be closely related if they have more characteristics in common which is only possible when they have common ancestor. With generations, an organism adapts according to its environment and becomes different from its ancestor. Classification of an organism is on the bases of their resemblance which is similar to making an evolutionary history.

Q 6: Explain the terms analogous and homologous organs with examples.

Q 7: Outline a project which aims to find the dominant coat color in dogs.

There are 11 identified genes that influence coat color in dogs. Dog inherits one gene from each parent and only the dominant gene gets expressed.

The dominant coat color in this case will be black.

Q 8: Explain the importance of fossils in deciding evolutionary relationships.

Fossils are the dead remains of plants and animals which undergo several physical and chemical processes after they are dead.

Fossils help us in determining how a presently living species evolved or developed from the old species.

Example- Archaeopteryx lithographica is a fossil that resembles a bird (has feathers and wings) but has several features of reptiles (tail and teeth). So Archaeopteryx is supposed to be the connecting link between aves and reptiles thus suggesting that birds have evolved from reptiles.

Q 9: What evidence do we have for the origin of life from inanimate matter (lifeless matter)?

The evidence for the origin of life from lifeless matter was given by Stanley Miller and Harold Urey in 1953. They recreated the probable conditions of primitive atmosphere of early earth and demonstrated that simple organic compound like amino acids, hydroxyl acids, sugars and urea can by synthesized in the laboratory from a mixture of methane, hydrogen, water vapor and ammonia. They supplied energy by heating the chamber containing the above mixture to 800 degree C and discharges by electric sparks. After about one week, the liquid was found to contain a number of amino acids such as glycine, alanine and aspartic acid. Amino acids make up proteins molecules in living organisms. Thus, the experiment is a evidence that life originated from inanimate matter.

Sexual reproduction involves two parents. Gametes from male and female fuse to form the zygote. In the process, exchange of genes occurs, which results in variation in the offspring.

Q 11: How is the equal genetic contribution of male and female parents ensured in the progeny?

The equal genetic contribution of male and female parents is ensured in the progeny by sexual reproduction. The male gamete, sperm, fertilizes the female gamete, egg to form a zygote. Both, sperm and egg are haploid but when they form a zygote, the zygote becomes diploid (haploid+ haploid), having 23 chromosomes from mother and 23 from father i.e. half the chromosome number comes from the mother and the other half comes from the father. Thus the genetic contribution of male and female parent is ensured in the progeny in this way.

Q 12: Only variations that confer advantage to an individual organism will survive in a population. Do you agree with this statement? Why or why not?

Yes; only variations that confer advantage to an individual organism will survive in a population. For example- In a population of red beetles, some sudden variation in reproduction produces a green colored beetle. Red beetles are a easy source of prey as they can be easily spotted on the green bushes. The green colored beetle that was produced by a variation could mix up with the green bushes and protect itself from being a prey to predator. If the variation that has occurred in the color of the beetle was blue, then it would have been of no advantage to help in surviving, as it would be easily open to predation like the red beetles.

In previous chapter we have discussed about the process of reproduction. In this chapter, we will discuss about the chapter tells us about the process of heredity and evolution. Inheritance from the previous generation provides both a common basic body design, and subtle changes in it, for the next generation. Heredity is the process of inheritance of certain traits from one generation to another. Mendel experiments on pea plants have been discussed to understand the process of heredity. DNA is responsible for the transfer of traits from one generation to another. The process of evolution takes place in accordance with area of survival of the organisms. Example of ants has been used to explain the concept. The process of sex determination of child is discussed. The chapter is very interesting and informative. Questions are asked on Mendal’s experiment, Sex determination, evolution in human beings and how to trace it and other important concepts dealt in the chapter.