Q 1: What is the difference between a reflex action and walking?

Q 2: What happens at the synapse between two neurons?

Transmission of nerve impulses between two neurons takes place through the synapse. Axon bulb releases specialized chemicals called as neurotransmitters like acetylcholine which help in chemical transfer of information through synapses into the dendrites of another neuron which receives the information and passes on further in a similar manner. These chemical messengers passes through synapses and start an electric impulse.

Q 3: Which part of the brain maintains posture and equilibrium of the body?

Cerebellum in the Hind Brain maintains posture and equilibrium of the body. Hind brain is divided into Pons, Cerebellum and Medulla.

Q 4: How do we detect the smell of an agarbatti (incense stick)?

The temporal lobes of the brain are concerned with smell, hearing and taste. When an incense stick burns, it produces fumes of pleasant smells. The forebrain has regions that receive impulses from various receptor organs. So when the smell of aggarbatti reaches our olfactory receptors (in nose), the receptors send electrical or chemical impulses via neurons to the forebrain. The forebrain thus detects the smell of an aggarbatti.

Q 5: What is the role of the brain in reflex action?

Q 1: What are plant hormones?

Q 3: Give an example of a plant hormone that promotes growth.

Q 4: How do auxins promote the growth of a tendril around a support?

Hydrotropism is the growth of roots in response to the unilateral stimulus of water. Roots are positively hydrotropic because they bend towards the source of water.

Germinate few seeds in moist dust in the ground. After some time you will observe that radicles start coming out of the ground but they start bending and again enter the moist saw dust. This happens because roots are positively hydrotropic. They bend towards the source of water i.e. moist sawdust in this case.

Q 1: How does the chemical coordination take place in animals?

Chemical coordination takes place in animals through Hormones. Hormones are chemical messengers released by the endocrine system that move through the blood stream and can reach every cell in the body. They help to maintain a constant environment inside the body, and control cellular activities by entering the cell and influencing its activities by sending commands to chemical messengers within cell.

Q 2: Why is the use of iodized salt advisable?

Lack of iodine in diet leads to deficiency of thyroxin hormone which results in a condition known as simple goitre. It is a swelling of the thyroid gland without any over secretion sign of thyroid hormone. If the iodine deficiency is moderate, it leads to high concentrations of Thyroid Stimulating Hormone which leads to swelling of the glands. For these reasons it is advisable to take iodine in diet because it stimulates the thyroid gland to produce thyroxin hormone and thus prevents from such disorders.

Q 3: How does our body respond when adrenaline is secreted into the blood?

Adrenaline is a hormone secreted by the adrenal glands in case of flight situation/emergency. When adrenaline is secreted into the blood, it

All these characteristics that occur on adrenaline secretion prepare the organism for flight from danger.

Q 4: Why are some patients of diabetes treated by giving injections of insulin?

A person suffers from diabetes when his/her body fails to produce adequate amount of Insulin.

Insulin is a hormone secreted by pancreas that helps in regulating the blood glucose level. If insulin is not produced in sufficient amount in blood, the level of glucose in the blood increases which leads to various serious conditions like retinopathy, blindness, fatigue, excessive urination and other serious complications too.

So in order to maintain the insulin level in the blood of a diabetic person, insulin injections are administered artificially into them.

Q 1: Which of the following is a plant hormone?

Q 2: The gap between two neurons is called a:

Synapse is the gap between two neurons that passes chemical or electrical signals from one neuron to another.

Q 3: The brain is responsible for:

Cerebellum helps in balancing the body.

Q 4: What is the function of receptors in our body? Think of situations where receptors do not work properly. What problems are likely to arise?

A receptor is a protein molecule that receives chemical signal from outside and interprets them. On receiving these signals the receptors bring about cellular responses. There are receptors in nose, tongue, ear, eye etc.

Q 5: Draw the structure of a neuron and explain its function. 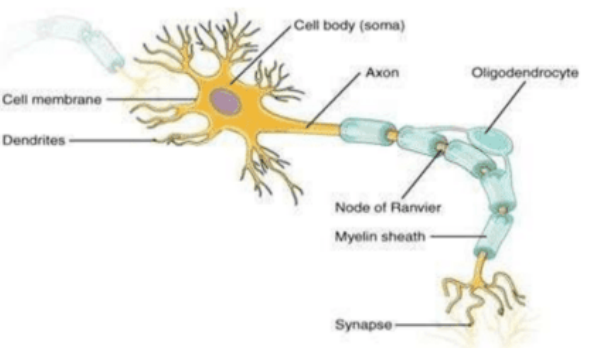 A neuron consists of a cell body which gives off a variable number of processes. They give off several short branching processes called dendrites and one longer process known as axon.

Neurons transmit chemical and electric signals in the brain. The ends of axons possess bulb like structures which have neurotransmitters in them, these bulbs connect with the dendrite of another neuron and form synapses. These neurotransmitters transmit signals from one end of neuron to the dendrites of another neuron, thus conducting the chemical impulse. Electrical signals also occur in neurons but they are comparatively slower.

Q 6: How does phototropism occur in plants?

Phototropism are curvature movements that occur when a plant is provided with artificial, natural light just from one direction. Plant parts that show a bending towards the source of light are said to be positively phototropic, whereas plant parts that bend/ grow away from light source are said to be negatively phototropic. This curvature / bending of parts usually stem is due to unequal distribution of auxin under the influence of light. Auxins accumulate on side away from light. So wherever auxin concentration will be high, the stem will promote growth on that side.

Q 7: Which signals will get disrupted in case of a spinal cord injury?

In case of a spinal cord injury, the signals coming from nerves and signals coming to the receptors will be disrupted, also disturbing the reflex and involuntary actions.

Q 8: How does chemical coordination occur in plant?

Chemical coordination occurs in plant with plant hormones. Plant hormones are synthesized at places away from where they act and diffuse to the area of action. Different plant hormones help to coordinate growth and development. For example, auxins and gibberellins. Gibberellins help in growth of the stem. Abscisic acid, another plant hormone, inhibits growth in plants.

Q 9: What is the need for a system of control and coordination in an organism?

There are various organs and organ systems in an organism.

To allow proper functioning and survival of an organism they need to be coordinated and controlled.

In human beings nervous system and endocrine system work together to control and coordination.

Q 10: How are involuntary actions and reflex actions different from each other?

How our body is controlled? Who control our body? What is the mechanism? How our body parts are controlled and various life processes are carried out. All that is taught in this chapter for animals (basically human beings) and plants. In plants it has been explained basically in form of autotropism and geotropism. Explanation about Nervous system of human beings, anatomy of the Human Brain, coordination in plant and hormones in animals has been discussed. The well labeled diagrams of Neuron, the nervous cell is discussed in this chapter.