Q.1. What would be the electron dot structure of carbon dioxide which has the formula CO2?
Answer

A molecule of CO2 consists of one atom of carbon and two atoms of oxygen. The electronic configuration of carbon is 2, 4 while that of oxygen is 2, 6. Each of the two atoms of oxygen shares two electrons with carbon atom to complete the octet of both the elements, thereby forming a double covalent bond.

(a) In S8, the atoms are joined together in the form of a ring.

Q.1. How many structural isomers can you draw for pentane?
Answer

We can draw three structural isomers of pentane (C5H12)

Q.2. What are the two properties of carbon which lead to the huge number of carbon compounds we see around us?
Answer

The two features of carbon that give rise to a large number of compounds are as follows:
→ Catenation- The self linking ability of carbon to form long straight chain, branched chain and closed ring structures.
→ Tetravalency- With the valency of four, carbon is capable of bonding with four other atoms. 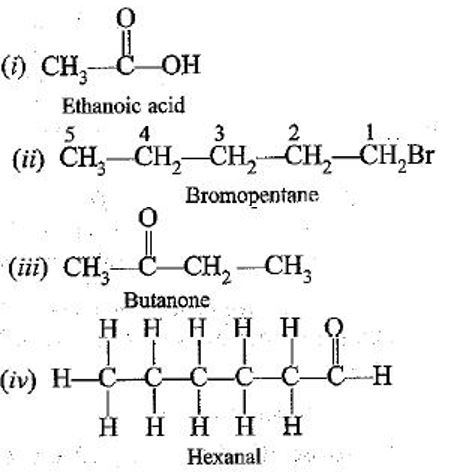 Yes the structural isomers of bromopentane are possible by both changing the position of bromine and branching in the parent carbon chain.

Q.5. How would you name the following compounds? 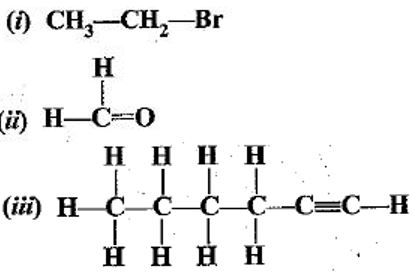 Q.1. Why is the conversion of ethanol to ethanoic acid an oxidation reaction?
Answer

Since the conversion of ethanol to ethanoic acid involves the addition of oxygen to ethanol, therefore it is an oxidation reaction.

Q.2. A mixture of oxygen and ethyne is burnt for welding. Can you tell why a mixture of ethyne and air is not used?
Answer

2HC ≡ CH + 5O2 → 4CO2 + 2H2O + Heat
When ethyne is burnt in air, it gives a sooty flame. This is due to incomplete combustion caused by a limited supply of air. However, if ethyne is burnt with oxygen, it gives a clean flame with temperature 3000°C because of complete combustion. This oxy-acetylene flame is used for welding. It is not possible to attain such a high temperature without mixing oxygen. This is the reason why a mixture of ethyne and air is not used.

Q.1. How would you distinguish experimentally between an alcohol and a carboxylic acid?
Answer

Q.2. What are oxidising agents? Give an example.
Answer

Those substances which give oxygen or replace hydrogen on reaction with other compounds are known as oxidising agents. For example, potassium permanganate (KMnO4).

Q.1. Would you be able to check if the water is hard by using a detergent?
Answer

Detergents are ammonium or sulphonate salts of long-chain carboxylic acids. Unlike soap, they do not react with calcium and magnesium ions present in hard water to form scum. They give a good amount of lather irrespective of whether the water is hard or soft. This means that detergents can be used in both soft and hard water. Therefore, it cannot be used to check whether the water is hard or not.

Q.2. People use a variety of methods to wash clothes. Usually after adding the soap, they ‘beat’ the clothes on a stone, or beat it with a paddle, scrub with a brush or the mixture is agitated in a washing machine. Why is agitation necessary to get clean clothes?
Answer

A soap molecule has two parts namely hydrophobic and hydrophilic. With the help of these, it attaches to the grease or dirt particles and forms a cluster called a micelle. These micelles remain suspended in solution as a colloid.
When water is agitated, the oily dirt tends to lift off from the dirty surface and dissociates into fragments. This gives an opportunity to other tails to stick to oil. This results in the formation of an emulsion in water. This emulsion now contains small globules of oil surrounded by soap or detergent molecules. The negatively charged heads present in water prevent the small globules from coming together and form clusters. Thus, the oily dirt is removed from the object.

(b)
The structural formula for ethane is

So, it has 7 covalent bonds.

Q.2. Butanone is a four-carbon compound with the functional group
(a) Carboxylic acid.
(b) Aldehyde.
(c) Ketone.
(d) Alcohol.
Answer

(c)
Butanone has the formula CH3COCH2CH3. Thus, it has ketone as a functional group. Option (c) is correct.

(b)
This means that the fuel is not burning completely and unburnt carbon particles get deposited on the bottom of the vessel, making it black.

Q.4. Explain the nature of the covalent bond using the bond formation in CH3Cl.
Answer

Carbon has four valence electrons. It shares one electron with chlorine and one electron each with three hydrogen atoms.

(i) Structure of Ethanoic acid (CH3COOH) 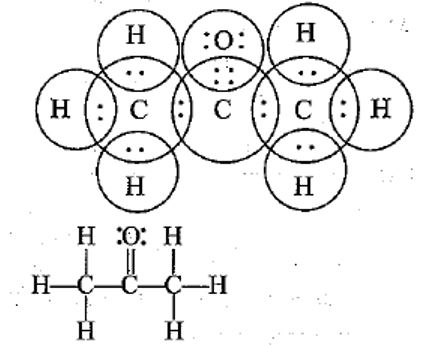 Q.6. What is a homologous series? Explain with an example.
Answer

Q.7. How can ethanol and ethanoic acid be differentiated on the basis of their physical and chemical properties?
Answer

Q.8. Why does micelle formation take place when soap is added to water? Will a micelle be formed in other solvents such as ethanol also?
Answer

Q.9. Why are carbon and its compounds used as fuels for most applications?
Answer

Q.10. Explain the formation of scum when hard water is treated with soap.
Answer

Q.11. What change will you observe if you test soap with litmus paper (red and blue)?
Answer

As a soap solution is basic in nature, it will turn red litmus paper into blue but it will not affect blue litmus paper.

Q.12. What is hydrogenation? What is its industrial application?
Answer

Hydrogenation is a process in which Hydrogen is added in the presence of nickel or palladium as a catalyst.
Industrial application: The process of hydrogenation is used to prepare vegetable ghee from vegetable oil.

Q.14. Give a test that can be used to differentiate chemically between butter and cooking oil.
Answer

Q.15. Explain the mechanism of the cleaning action of soaps.
Answer A soap molecule has hydrophobic and hydrophilic ends. In water, hydrophobic ends of soap, which consists of hydrocarbon chains, cluster together to form micelles. The oily dirt collects in the centre of micelle. These micelles stay in solution as a colloid and will not come together to form precipitate because of ion-ion repulsion. Thus the dirt suspended in the micelles can be easily rinsed away and hence, soaps are effective in cleaning. 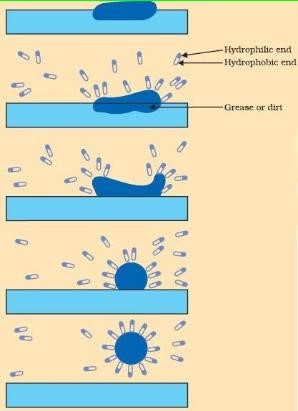