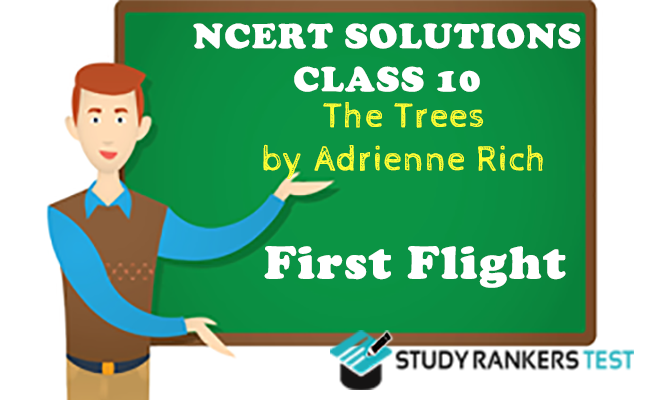 Q1. (i) Find, in the first stanza, three things that cannot happen in a treeless forest.
(ii) What picture do these words create in your mind: “… sun bury its feet in shadow…”? What could the poet mean by the sun’s ‘feet’?
Answer
(i) The three things that cannot happen in a treeless forest are the sitting of a bird on trees, the hiding of insects and the sun burying its feet in the shadow of the forest.
(ii) The sun radiates heat and the given words create a picture of the hot, radiating sun cooling its feet in the cool shadow of the forest. The sun’s ‘feet’ refers to its rays that reach the earth.

Q2. (i) Where are the trees in the poem? What do their roots, their leaves and their twigs do?
(ii) What does the poet compare their branches to?

Answer
(i) In the poem, the trees are in the poet’s house. Their roots work all night to disengage themselves from the cracks in the veranda floor. The leaves make efforts to move towards the glass, while the small twigs get stiff with exertion.

(ii) The poet compares the ‘long-cramped’ branches that have been shuffling under the roof to newly discharged patients who look half-dazed as they move towards the hospital doors after long illnesses and wait to get out of the hospital. The branches also have cramped under the roof and want to get out into the open to spread themselves in fresh air.

Q3. (i) How does the poet describes the moon: (a) at the beginning of the third stanza, and (b) at its end? What causes this change?
(ii) What happens to the house when the trees move out of it?

Answer
(i) In the beginning of the third stanza, the poet says that the whole moon is shining in the open sky in the fresh night. However, at the end of the stanza, she describes the moon as broken into many pieces such as a shattered mirror. This change is caused by the trees that have made their way from her home to outside. Their branches have risen into the sky, blocking the moon, which is why the moon seems to be broken into many pieces. These pieces can be seen flashing at the top of the tallest oak tree.

(ii) When the trees move out of the house, the glass gets broken and the smell of the leaves and lichens still reaches the rooms of the house.

Q4. Now that you have read the poem in detail, we can begin to ask what the poem might mean. Here are two suggestions. Can you think of others?
(i) Does the poem present a conflict between man and nature? Compare it with A Tiger in the Zoo. Is the poet suggesting that plants and trees, used for ‘interior decoration’ in cities while forests are cut down, are ‘imprisoned’, and need to ‘break out’?
(ii) On the other hand, Adrienne Rich has been known to use trees as a metaphor for human beings: this is a recurrent image in her poetry. What new meanings emerge from the poem if you take its trees to be symbolic of this particular meaning?

Answer
(i) Yes, the poem presents a conflict between man and nature. While nature is more free and unbounded, man prefers to live in bounded spaces and also wants to curb nature. He uses plants for interior decoration of houses, cuts trees to make a house for himself, kills animals for food or other purposes and cages them in zoos. In all these ways, man curbs nature and denies plants and animals the freedom in which they should live. The poem shows that trees and plants are rebelling against man as they strive to work their way out into the open. For instance, in the poem A Tiger in the Zoo, the poet presents the fact that animals feel bound by cages. They can only take a few steps inside the cage, whereas they really want to run and leap into the open. This signifies the fact that plants and animals feel caged by humans and want to break out from imprisonment at the hands of humans.

(ii) If trees are symbolic of human beings, then it could be said that humans too want to break away from the shackles of the busy and selfish lives they lead. They also want to go out into nature and be free. They work all day and sometimes all night to try and achieve something even though they do not have the time to enjoy it. They keep striving hard in their routines as they feel cramped under the roofs of their homes and offices. Even if they want to break free and go out into the peaceful nature.