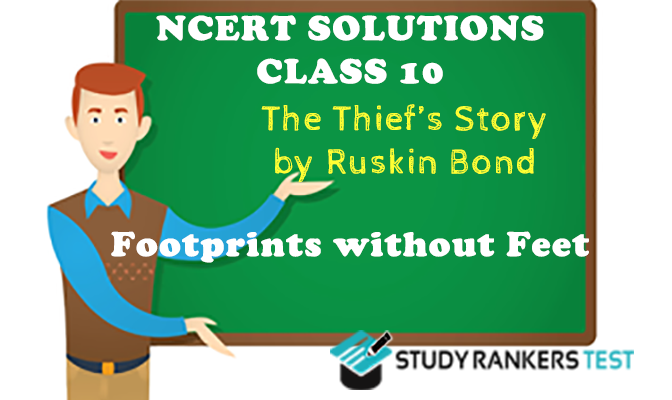 Ques 1: Who does ‘I’ refers to in this story?
Answer

In this story, ‘I’ refers to the thief.

Ques 2: What is he “a fairly successful hand” at?
Answer

He was “a fairly successful hand” at stealing and robbing people.

Ques 3: What does he get from Anil in return for his work?

When Hari asked Anil if he could work for him, Anil said that he could not pay him. Finally, the agreement was that if he would cook, then Anil would feed him. However, Anil soon found out that he did not know how to cook. Therefore, he taught him how to cook and later, how to write his name. He promised he would teach him how to write whole sentences and how to add numbers. Apart from this, when Hari went out to buy the day’s supplies, he would make a profit of a rupee a day.

Ques 1: How does the thief think Anil will react to the theft?

Ques 2: What does he say about the different reactions of people when they are robbed?
Answer

In his short career as a thief, he had made a study of men’s faces when they lost their goods. He said that the greedy men showed fear; the rich men showed anger and the poor men showed acceptance.

Ques 3: Does Anil realize that he has been robbed?
Answer

Yes, Anil had realized that he had been robbed. He knew this probably because all the notes were wet and damp from the rain. However, he did not say anything to the thief and behaved normally.

Ques 1: What are Hari Singh’s reactions to the prospect of receiving an education? Do they change over time? (Hint: compare, for example, the thought: “I knew that once I could write like an educated man there would be no limit to what I could achieve” with these later thoughts: ‘Whole sentences, I knew, cloud one day bring me more than a few hundred rupees. It was a simple matter to steal − and sometimes just as simple to be caught. But to be a really big man, a clever and respected man, was something else.”) What makes him return to Anil?
Answer

Hari Singh’s reactions to the prospect of receiving an education change over time. When he started living with Anil he wanted to be literate so that he could become a more cunning cheat. Later on there is a change in his heart. He wants to earn respect in life. Probably he is influenced by the calm in Anil’s life. Although, both of them depend on an irregular sources of income, but Anil seems to be more satisfied. Hari Singh develops a desire to be part of the civilized society.

Ques 2: Why does not Anil hand the thief over to the police? Do you think most people would have done so? In what ways is Anil different from such employers?
Answer

Anil does not hand the thief over to the police because he has put the money back at its place. It shows that he realized his fault. He wants to make amends for his ways. He must have felt guilty with himself. Anil wants to give him one more chance and therefore forgives him.
No, in today’s world most people would not have done so. Although it must be done but such sort of patience and compassion are rarely found now a days in this human world.

Ques 1: Do you think people like Anil and Hari Singh are found only in fiction, or are there such people in real life?
Answer

No, I don’t think that people like Anil and Hari Singh are found only in fiction. There are such people in real life also. Although such people are rare in today’s society. If one is caught stealing, people will first beat him severely. Then he will be handed over to the police. It should be realized that a human being is bound to commit errors. One chance for reforming oneself must be given. This is the only way to bring anyone to the right path. Punishing severely is not the only solution. Strictness can make them an absolute criminal.

Ques 2: Do you think it is a significant detail in the story that Anil is a struggling writer? Does this explain his behavior in any way?
Answer

Hari Singh’s observation about Anil getting an irregular income and Anil’s statement about his sale of a book to a publisher indicates that he is a struggling writer. He lives life according to the flow of money he gets at a given time. When he gets the money he enjoys eating out with his friends. When he is having less money then he even doesn’t accept paying salary to Hari Singh.