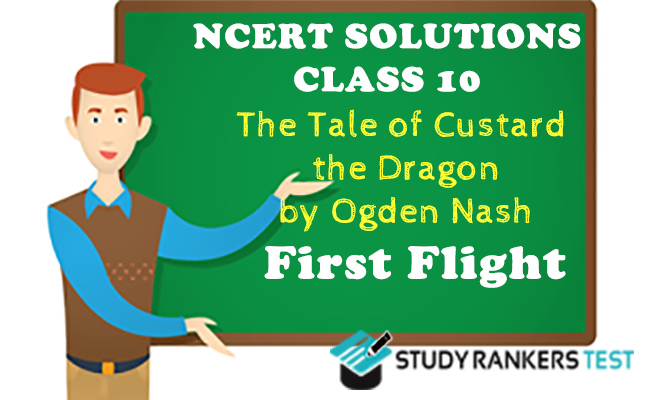 Q2. Why did Custard cry for a nice, safe cage? Why is the dragon called a “cowardly dragon”?
Answer
Custard cried for a nice, safe cage because it was a coward. It is called a ‘cowardly dragon’ because everybody else in the house was brave. Belinda was as brave as a barrel of bears. Ink and Blink are described as so brave that they could chase lions down the stairs and Mustard was as brave as a tiger in a rage. Compared to them, Custard cried asking for a nice and safe cage, which is why it is called a coward.

Q4. The poet has employed many poetic devices in the poem. For example: “Clashed his tail like iron in a dungeon” − the poetic device here is a simile. Can you, with your partner, list some more such poetic devices used in the poem?
Answer
In the entire poem, the poet has made extensive use of similes. Apart from simile, another poetic device that has been used is repetition. For example, the repetitive use of the word ‘little’ in the first stanza to emphasise how everything from the house to Belinda to her pets were all little. Also, in the seventh stanza, the poet has made use of incorrect spelling as a poetic device to maintain the rhyme scheme of the poem. He has chosen to write ‘winda’ instead of ‘window’ as ‘winda’ rhymes with ‘Belinda’, whereas ‘window’ does not. He has also used alliteration in the poem. For example, in the tenth stanza, ‘Custard’ has ‘crashed’ his tail with a ‘clatter’ and a ‘clank’. Similarly, in stanza eleven, the pirate ‘gape’ at the dragon and ‘gulped’ some ‘grog’.

Q8. Do you find The Tale of Custard the Dragon to be a serious or a light-hearted poem? Give reasons to support your answer.
Answer
The Tale of Custard the Dragon is a light-hearted poem. It is almost a parody. The names of the pets of Belinda are all rhyming and funny. Belinda has been compared to a barrel full of bears. The kitten and mouse, both little, could chase lions down the stairs. The little yellow dog was as brave as a tiger, while the dragon was a coward and they all teased him. However, when the pirate came to their little house, all of them were engulfed in fear and had hid themselves. Ironically, the ‘cowardly’ dragon came to their rescue and jumped snorting like an engine. It clashed its tail and charged at the pirate like a robin at a worm and ate him up. Even as everybody became happy to see the bravery of the dragon, they again came back to glorifying themselves that they could have been twice or thrice braver than the dragon. Finally, at the end of the poem, the situation again came back to the other pets being brave and the dragon being the coward.