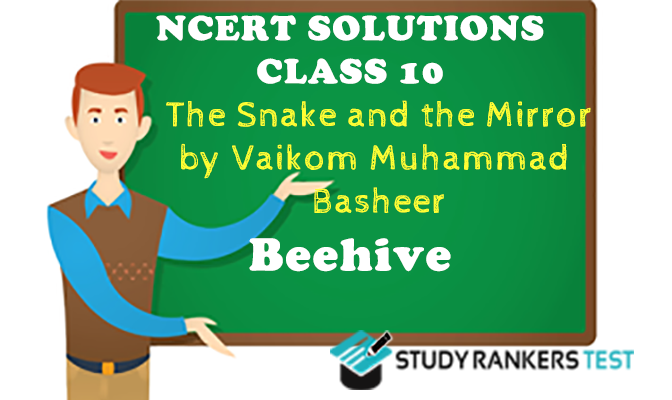 Think about the Text

I. Discuss in pairs and answer each question below in a short paragraph (30 − 40 words).

Q1. “The sound was a familiar one.” What sound did the doctor hear? What did he think it was? How many times did he hear it? (Find the places in the text.) When and why did the sounds stop?
Answer
The doctor lived in a room which was full of rats. He heard the sounds of the rats. There was regular traffic of rats to and from the beam. He heard the sound thrice. The sound stopped suddenly as rats had seen a snake.

Q3. “I looked into the mirror and smiled,” says the doctor. A little later he says, “I forgot my danger and smiled feebly at myself.” What is the doctor’s opinion about himself when:
(i) he first smiles, and
(ii) he smiles again? In what way do his thoughts change in between, and why?

Answer
(i) When the doctor first smiles, he has an inflated opinion of himself, admiring his looks and profession.
(ii) In the second instance, the doctor smiles at his foolishness and helplessness.
His thoughts change after his encounter with the snake—from being a proud doctor he moves on to accept his stupidity.

Q1. this story about a frightening incident is narrated in a humorous way. What makes it humorous? (Think of the contrasts it presents between dreams and reality. Some of them are listed below.
1. (i) The kind of person the doctor is (money, possessions)
(ii) The kind of person he wants to be (appearance, ambition)
2.(i) The person he wants to marry
(ii) The person he actually marries
3.(i) His thoughts when he looks into the mirror
(ii) His thoughts when the snake is coiled around his arm
Write short paragraphs on each of these to get your answer.

Answer
1. (i) The doctor is a poor person. He has hardly any money. he lives in an unelectrified house. It is a small rented room with plenty of rats living in it. He has just started his medical practice. So he is not a man of possessions or money.
(ii) The Person wants to be rich, he also would like to have a good appearance. That’s why he decides to grow a thin mustache.

2. (i) The doctor wants to marry a woman doctor with good medical practice and a lot of money. She would be fat as not to run after him and catch him.
(ii) He marries a thin reedy woman who has a gift of the sprinter.

3. (i) His thoughts are full of joy and satisfaction. He decides to grow thin mustache and keep smiling always. He finds his smile attractive
(ii) He turned to stone. He sat like a stone image in the flesh. However, his mind was very active. He felt the great presence of the creator. He decides to write the words ‘O God’ outside his little heart.

Q1. Here are some sentences from the text. Say which of them tell you, that the author:
(a) was afraid of the snake,
(b) was proud of his appearance,
(c) had a sense of humour,
(d) was no longer afraid of the snake.
1. I was turned to stone.
2. I was no mere image cut in granite.
3. The arm was beginning to be drained of strength.
4. I tried in my imagination to write in bright letters outside my little heart the words, ‘O God’.
5. I didn’t tremble. I didn’t cry out.
6. I looked into the mirror and smiled. It was an attractive smile.
7. I was suddenly a man of flesh and blood.
8. I was after all a bachelor, and a doctor too on top of it!
9. The fellow had such a sense of cleanliness…! The rascal could have taken it and used it after washing it with soap and water.
10. Was it trying to make an important decision about growing a mustache or using eye shadow and mascara or wearing a vermilion spot on its forehead
Answer

IV.
Report these questions using if/whether or why/when/where/how/which/what.
Remember the italicized verbs change into the past tense.

1. Meena asked her friend, “Do you think your teacher will come today?”
2. David asked his colleague, “Where will you go this summer?”
3. He asked the little boy, “Why are you studying English?”
4. She asked me, “When are we going to leave?”
5. Pran asked me, “Have you finished reading the newspaper?”
6. Seema asked her, “How long have you lived here?”
7. Sheila asked the children “Are you ready to do the work?”

Answer
1. Meena asked her friend if she thought her teacher would come that day.
2. David asked his colleague where he would go that summer.
3. He asked the little boy why he was studying English.
4. She asked me when we were going to leave.
5. Pran asked me if I had finished reading the newspaper.
6. Seema asked her how long she had lived there.
7. Sheila asked the children if they were ready to do the work.