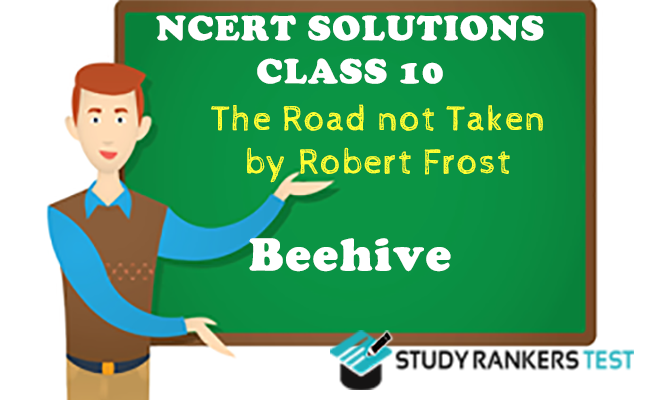 Ques 1. Where does the traveller find himself? What problems does he face?
Answer

The traveller finds himself in the yellow woods at a point where the road forks into two.
The problem that he faces is that he cannot decide which road to take to continue his journey since it is not possible for him to travel both roads at the same time.

Ques 2. Discuss what these phrases mean to you.

(i) a yellow wood
Answer

Yellowwood symbolizes the autumn season. Autumn corresponds with old age. The poet could be symbolically talking about the later stages of life.

(ii) it was grassy and wanted wear
Answer

It conveys that the road was full of grass and nobody has used that road. It was a smooth road which had not worn out.

(iii) the passing there
Answer

The use of the path by passersby.

The leaves had not changed their colour and turned black because of less people stepping on them. It could represent a path one may have never/seldom taken in life for the fear of uncertainty.

(v) how way leads on to way
Answer

This phrase means how certain decisions one makes in life could pave the way for many other decisions.

Ques 3. Is there any difference between the two roads as the poet describes them
(i) in stanzas two and three?
(ii) in the last two lines of the poem?
Answer

(i) In stanza two the poet explains that the only difference between the two roads was that the road he took had the right to be chosen (the better claim) because it was covered with grass and looked as if it had not been used too much. Besides this difference, both roads had been equally worn down by passersby travelling on them.
In stanza three the poet says that both the roads were equally covered with leaves and that no person had stepped on.

(ii) In the last two lines of the poem, the poet says that there is a difference between the two roads because he took the road that was less travelled by other people and that made all the difference to his journey.

Ques 4. What do you think the last two lines of the poem mean? (Looking back, does the poet regret his choice or accept it?
Answer

The last two lines of the poem mean the acceptance of reality. The poet made a choice and accepted the challenging path. He took an unexplored path in his life. He wanted to do something different in his life so he chooses the less travelled road. No, he does not regret his choice.

No, till now I have never been in a situation in which I had to make a difficult choice. Perhaps I am still too young to make an independent choice.

Yes, I think later or sooner I will have difficult choices to make. After completing my general education, I will have to make a choice of the profession whether I should become an engineer or doctor or something else.

I will have hundreds of options before me. Then it will be difficult to make a choice between them. I will make a choice according to my capabilities and strong points at that time. I will choose a path that gives me satisfaction and mental peace. I will not join the rat race for money. Like the poet in the poem, I will choose a challenging and unexplored path in my life.

Ques 2. After you have made a choice do you always think about what might have been, or do you accept the reality?
Answer

Taking a decision sometimes makes or mars our future. Having made a choice, I accept reality. Reconsidering a decision or contemplating over it is not a positive approach towards life. Such thoughts never allow us to be happy with what we have gained from our decision. Therefore, I believe in sticking to my decisions.