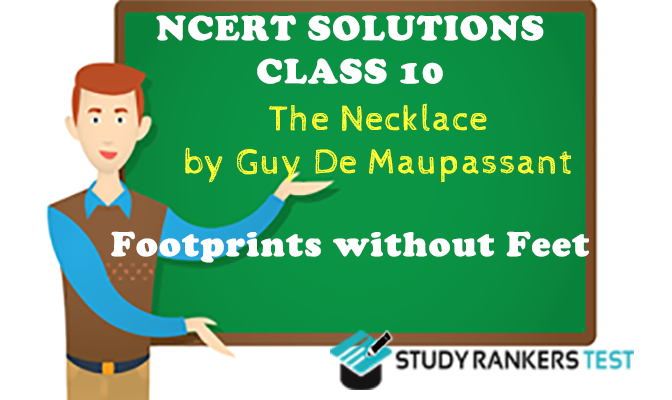 Page No: 39
Read and Find Out
Q 1. What kind of a person is Mme Loisel − why is she always unhappy?
Answer
Mme. loisel is a dreamy woman. She gives much value to her dreams. She over-looks the realities of life. That is why, she is always unhappy because dreams can’t be true . She wants them to be true.

Q 2. What kind of a person is her husband?
Answer
Her husband is a very simple hearted person. He is an ordinary person. He is a caring husband. He wants to see Mme. Loisel happy.

Page No: 41
Read and Find Out
Q 1. What fresh problem now disturbs Mme Loisel?
Answer
After buying a pretty dress, Mme Loisel was bothered by yet another problem. She had no jewel to adorn herself with. She said she would have a poverty-stricken look. Her husband suggested that she should wear some natural flowers. However, she refused and said that there was nothing more humiliating than to have a shabby air in the midst of rich women.

Q 2. How is the problem solved?
Answer
Mme Loisel’s husband solved this problem. He told his wife to request her friend, Mme Forestier to lend her some jewels. When she went to Mme Forestier, the latter brought a jewel case, so that Mme Loisel could choose whichever jewels she liked.

Page No: 42
Read and Find Out
Q 1. What do M. and Mme Loisel do next?
Answer
When M. and Mme Loisel realized that the necklace was missing, they tried finding out where she could have lost it. They concluded that it could have been dropped in the cab. They did not know its number. Therefore, Loisel went over the track where they had walked. When he found nothing, he went to the police and to the cab offices. He even put an advertisement in the newspapers, offering a reward. He then asked Matilda to write a letter to Mme Forestier, explaining that she had broken the clasp of the necklace and would get it repaired. This gave them time to find the necklace. However, they eventually decided to replace the necklace with a new one.

Page no: 46
Thinking about the text
Q 1. The course of the Loisels’ life changed due to the necklace. Comment.
Answer
The course of the Loisel’s life changed due to the necklace. After replacing the lost necklace with a new one, they had to replay all the money that they had borrowed to buy the new necklace. They sent away the maid and changed their lodgings. They rented some rooms in an attic. Matilda learnt the odious work of a kitchen. She washed the dishes, soiled linen, their clothes and dishcloths. She took down the refuse to the street each morning and brought up the water, stopping at each landing to catch her breath. She went to the grocer’s, the butcher’s, and the fruiter’s, with her basket on her arm, shopping, haggling to save her money. Loisel worked in the evenings, putting the books of some merchants in order. At night, he did copying at five sous a page. This lasted for ten years, and at the end of the said period, they were able to repay their lenders.

She could have avoided the ruin by being content with what she had.

Q 3. What would have happened to Matilda if she had confessed to her friend that she had lost her necklace?
Answer
If Matilda would have confessed to her friend that she had lost her necklace, she might have been in lesser trouble than what she faced after having replaced the necklace. Her friend would definitely have been angry with her. Most probably, she would have asked Matilda to replace it. She would have given her the details from where she had bought the necklace and how much it had cost her. Matilda would thus have known that the jewels in the necklace were not real diamonds. It would have cost her a far lesser amount to replace it. Matilda would thus have saved herself and her husband all the trouble they went through.