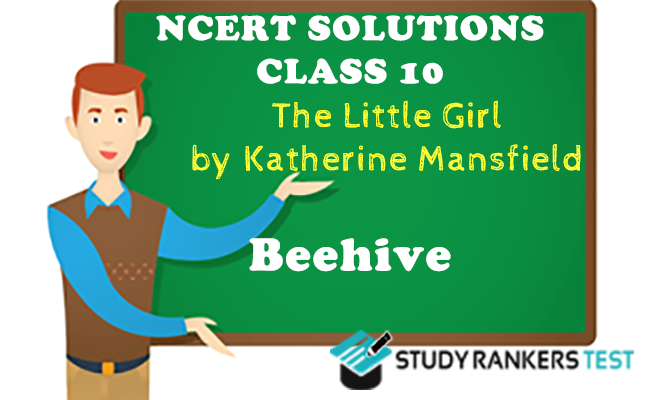 Thinking about the Text
I. Given below are some emotions that Kezia felt. Match the emotions in Column A with the items in Column B.
Answer
II. Answer the following questions in one or two sentences.

1. Why was Kezia afraid of her father?
2. Who were the people in Kezia’s family?
3. What was Kezia’s father’s routine
(i) before going to his office?
(ii) after coming back from his office?
(iii) on Sundays?
4. In what ways did Kezia’s grandmother encourage her to get to know her father better?

Answer
1. Kezia was a little sensitive girl. Her father was aggressive and always spoke loudly. He always scolded her. He used to beat her. Even when she accepted her mistakes. He never played with her. This made her afraid of her father.

2. Kezia’s family consists of her mother, father, grandmother and herself.

3. (i) Before going to his office, Kezia’s father usually went into her room to give her a casual kiss.
(ii) After coming back from his office, he ordered tea to brought into the drawing-room. He also asked his mother to bring him the newspaper and his slippers, and Kezia to pull off his boots.
(iii) On Sunday, Kezia’s father would stretch out on the sofa. He would cover his face with his handkerchief, put his feet on one of the cushions and sleep soundly.

4. Kezia’s grandmother encouraged her to get to know her father better by sending her to the drawing room to talk to her parents on Sundays. She also suggested Kezia to make a pin cushion out of a beautiful piece of yellow silk as a gift for her father’s birthday.

III. Discuss these questions in class with your teacher and then write down your answers in two or three paragraphs each.

1. Kezia’s efforts to please her father resulted in displeasing him very much. How did this happen?

Answer
Kezia efforts to please her father resulted in displeasing him. On every Sunday, her grandmother sent her down to the drawing room to have a nice talk with father and mother. But her presence always irritated the father. He used to call her ‘little brown owl’.
One day her grandmother told her that her father’s birthday would be next week and suggested that she should make him a pin-cushion for beautiful gift. After stitching three sides of the cushion with double cotton with great care and effort, Kezia was stuck as to what to fill the cushion with. Since her grandmother was busy in the garden, she searched her Mother’s bedroom for scraps. Finally, she discovered sheets of paper on the bed table. She gathered these, tore them up and filled the cushion with the torn pieces.
Unfortunately, her efforts to please her father not only went in vain but also had an unanticipated consequence. This was because the sheets she had torn were her father’s speech for the Port Authority. Her father scolded her for touching things that did not belong to her and punished her by hitting her palm with a ruler.

2. Kezia decides that there are “different kinds of fathers”. What kind of father was Mr Macdonald, and how was he different from Kezia’s father?

3. How does Kezia begin to see her father as a human being who needs her sympathy?

Answer
With her mother and grandmother at the hospital, Kezia is left at home in the care of Alice, the cook. At night, after she is put to bed by the cook, she has a nightmare.
She calls for her grandmother but, to her surprise, she finds her father standing near her bed. He takes her in his arms and makes her sleep next to him. Half asleep, she creeps close to him, snuggles her head under his arm, and holds tightly to his shirt. Her father asks her to rub her feet against his legs for warmth.
Her father goes off to sleep before her. This makes her understand that he has to work hard every day and this leaves him too tired to be like Mr. Macdonald. She expresses her altered feelings for her father by telling him that he has a ‘big heart’.

I. Look at the following sentence.

(i)  She was thrilled by the news of her brother’s wedding.
(ii)  I was delighted to be invited to the party.
(iii)  She was overjoyed at the birth of her granddaughter.
(iv)  The coach was pleased with his performance.
(v)  She was very happy with her results.

1. Underline the verbs of reporting in the following sentences.
(i) He says he will enjoy the ride.
(ii) Father mentioned that he was going on a holiday.
(iii) No one told us that the shop was closed.
(iv) He answered that the price would go up.
(v) I wondered why he was screaming.
(vi) Ben told her to wake him up.
(vii) Ratan apologized for coming late to the party.

(i) He says he will enjoy the ride.
(ii) Father mentioned that he was going on a holiday.
(iii) No one told us that the shop was closed.
(iv) He answered that the price would go up.
(v) I wondered why he was screaming.
(vi) Ben told her to wake him up.
(vii) Ratan apologized for coming late to the party.

2. Some verbs of reporting are given in the box. Choose the appropriate verbs and fill in the blanks in the following sentences.

Answer
(i) “I am not afraid,” replied the woman.
(ii) “Leave me alone,” my mother shouted.
(iii) The children were complaining that the roads were crowded and noisy.
(iv) “Perhaps he isn’t a bad sort of a chap after all,” remarked the man.
(v) “Let’s go and look at the school ground,” suggested the sports teacher.
(vi) The traffic police ordered all the passers-by to keep off the road.