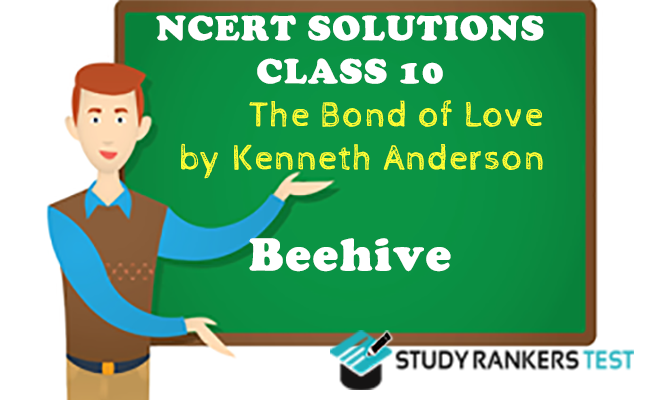 I. Given in the box are some headings. Find the relevant paragraphs in the text to match the headings.

II. Answer the following questions.
1.“I got him for her by accident.”
(i) Who says this?
(ii) Who do ‘him’ and ‘her’ refer to?
(iii) What is the incident referred to here?
Answer
(i) Narrator said this.
(ii) Here, ‘him’ refers to the sloth bear and ‘her’ refers to the narrator’s wife.
(iii) About two years ago the narrator and his companions were passing through the sugarcane fields near Mysore. Suddenly, they saw a black sloth bear. One of the narrator’s companions shot it on the spot. As they saw the fallen animal, they were surprised to see that the black fur on its back moved. Then they saw that it was a baby bear that had been riding on its mother’s back. The narrator ran up to it and attempted to capture it. He finally succeeded in grabbing it and gifted it to his wife. This incident is referred to in the above statement

2. “He stood on his head in delight.”
(i) Who does ‘he’ refer to?
(ii) Why was he delighted?
Answer
(i) ‘He’ refers to the bear, Bruno.
(ii) Bruno was delighted to see the narrator’s wife after three months of separation.

3. “We all miss him greatly: but in a sense we were relieved.”
(i) Who does ‘we all’ stand for?
(ii) Who did they miss?
(iii) Why did they nevertheless feel relieved?
Answer
(i) ‘We all’ stands for the narrator, his wife, and his son.
(ii) They missed Bruno (Baba).
(iii) They felt relieved because Baba was getting too big to be kept at home. That is why they had sent him off to a zoo.

III. Answer the following questions in 30 to 40 words each.
Q1. On two occasions Bruno ate/drank something that should not be eaten /drunk. What happened to him on these occasions?
Answer

Bruno ate some poison-barium carbonate He also vomited and breathed heavily, but was later cured. In another incident, he drank nearly a gallon of old engine oil. Fortunately, he remained unaffected.meant for the rats, which paralyzed and weakened him.

Q2. Was Bruno a loving and playful pet? Why, then, did he have to be sent away?
Answer

Yes, Bruno was a loving and playful pet. Everybody in the family was attached to it,  especially the narrator’s wife. It had to be sent away to a zoo because it was getting too big to be kept at home.

Q3. How was the problem of what to do with Bruno finally solved?
Answer

Bruno was not happy at the zoo. Seeing its condition and its happiness at seeing the narrator’s wife, Bruno was allowed to go back to Bangalore. There, The island was made for the bear, keeping all its needs in mind.

Thinking about Language
I.
1. Find these words in the lesson. They all have ie or ei in them.

2. Now here are some more words. Complete them with ei or ie. Consult a dictionary if necessary.

(There is a popular rule of spelling: ‘i’ before ‘e’ except after ‘c’. Check if this rule is true by looking at the words above.)
Answer

Page No: 120
II. Here are some words with silent letters. Learn their spelling. Your teacher will dictate these words to you. Write them down and underline the silent letters.

(i) A dash back to the car. Bruno still floundering about on his stumps, but clearly weakening rapidly; some vomiting, heavy breathing, with heaving flanks and gaping mouth.
Hold him everybody! In goes the hypodermic – Bruno squeals – 10 c.c. of the antidote enters his system without a drop being wasted. Then minutes later: condition unchanged! Another 10 c.c. injected! Ten minutes later: breathing less stertorous – Bruno can move his arms and legs a little although he can not stand yet. Thirty minutes later: Bruno gets up and has a great feed! He looks at us disdainfully, as much as to say, ‘What’s barium carbonate to a big black bear like me?’ Bruno is still eating.

(ii) In the paragraphs above from the story the verbs are in the present tense (eg. hold, goes, etc.). This gives the reader an impression of immediacy. The present tense is often used when we give a commentary on a game (cricket, football, etc.), or tell a story as if it is happening now. It is, therefore, called the narrative present.
You will read more about the present tense in Unit 10

Answer
(i) The vet and I made a dash back to the car. Bruno was still floundering about on his stumps, but clearly he was weakening rapidly. There was some vomiting and heavy breathing. His flanks were heaving and his mouth was gaping.
Everybody was asked to hold him. The hypodermic medicine went into Bruno, who squealed. 10 c.c. of anecdote entered his system without a drop being wasted. Even ten minutes later, the condition was unchanged. Another 10 c.c. was injected into him. Ten minutes later, his breathing became less stertorous. Bruno could move his arms and legs a little although he could not stand yet. Thirty minutes later, Bruno got up and had a great feed. He looked at us disdainfully, as much as to say, ‘What’s barium carbonate to a big black bear like me?’ Bruno was still eating.

2. Adverbs
Find the adverbs in the passage below. (You’ve read about adverbs in Unit 1.)

We thought that everything was over when suddenly a black sloth bear came out panting in the hot sun. we will not shoot a sloth-bear wantonly but, unfortunately for the poor beast, one of my companions did not feel that way about it, and promptly shot the bear on the spot.

(i)
(a) Rana does her homework timely.
(b) It rains heavily in Mumbai in June.
(c) He does his work properly.
(d) The dog serves his master faithfully.

(ii)
(a) We should never get down from a moving train.
(b) I was badly in need of support after my poor performance.
(c) Rita met with an accident. The doctor examined her immediately.

3. Take down the following scrambled version of a story, that your teacher will dictate to you, with appropriate punctuation marks. Then, read the scrambled story carefully and try to rewrite it rearranging the incidents.

A grasshopper, who was very hungry, saw her and said, “When did you get the corn? I am dying of hunger.” She wanted to dry them. It was a cold winter’s day, and an ant was bringing out some grains of corn from her home. She had gathered the corn in summer.

It was a cold winter’s day, and an ant was bringing out some grains of corn from her home. She had gathered the corn in summer. She wanted to dry them. A grasshopper, who was very hungry, saw her and said, “When did you get the corn? I am dying of hunger.” “I collected it in summer,” said the ant. “What were you doing in summer? Why did you not store some corn?” The grasshopper replied, “I was too busy.” “What were you doing?” asked the ant again. “I was singing all day,” answered the grasshopper. “If you sang all summer,” said the ant, “you can dance all winter.”