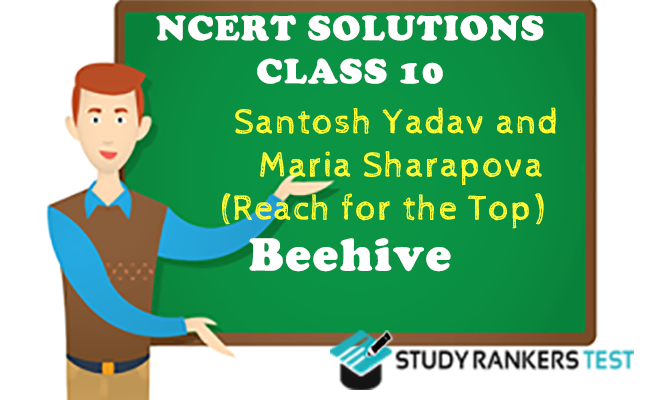 Thinking about the Text
I. Answer these questions in one or two sentences each. (The paragraph numbers within brackets provide clues to the answers.)
Q1. Why was the ‘holy man’ who gave Santosh’s mother his blessings surprised?
Answer
The ‘holy man’ was surprised because he had assumed that Santosh’s mother wanted a  son. But grandmother told him that they did not want a son.

Q3. Why was Santosh sent to the local school?
Answer
Even though Santosh’s parents could afford to send their children to the best schools, she was sent to the local village school due to the prevailing custom in the family.
Q4. When did she leave home for Delhi, and why?
Answer
When she turned sixteen and was under pressure to get married, Santosh threatened her parents that she would never marry if she did not get a proper education. Therefore, she left home and got herself enrolled in a school in Delhi.
Q5. Why did Santosh’s parents agree to pay for her schooling in Delhi? What mental qualities of Santosh are brought into light by this incident?
Answer
When Santosh’s parents refused to pay for her education, she politely informed them of her plans to earn money by working part time to pay her school fees. Then, her parents agreed to pay for her schooling in Delhi. This shows that Santosh was a mentally-strong girl and was determined to work very hard to get herself properly educated.

II. Answer each of these questions in a short paragraph (about 30 words).

Q1. How did Santosh begin to climb mountains?
Answer
From her room in Kasturba Hostel, she watched people going up the Aravalli Hills and vanishing after a while. On investigating, she found nobody except a few mountaineers, and she asked if she could join them. They agreed and even motivated her to take to climbing and so she later accompanied them on their climbing expedition. This was how she began climbing mountains.
Q2. What incidents during the Everest expedition show Santosh’s concern for her team-mates?
Answer
During the Everest mission, Santosh showed immense concern for her fellow climbers. Though she was unsuccessful in saving the life of one of them, she did manage to save another climber through artificial respiration.
Q3. What shows her concern for the environment?
Answer
Santosh was a fervent environmentalist. Her concern for the environment is evident from the fact that she collected and brought down 500 kilograms of garbage from the Himalayas.
Q4. How does she describe her feelings at the summit of the Everest?
Answer
Santosh asserted that her feeling at the summit of the Everest was “indescribable”. Unfurling the Indian flag on the top of the world was a spiritual moment for her and she felt proud as an Indian.
Q5. Santosh Yadav got into the record books both times she scaled Mt Everest. What were the reasons for this?
Answer
When Santosh Yadav first scaled Mt Everest, she became the youngest woman in the world to achieve the feat. When she scaled the Everest the second time, she became the only woman to have scaled it twice.

Page No: 107
Thinking about the Text

Working in small groups of 4−5 students, go back over the two passages on Santosh Yadav and Maria Sharapova and complete the table given below with relevant phrases or sentences.