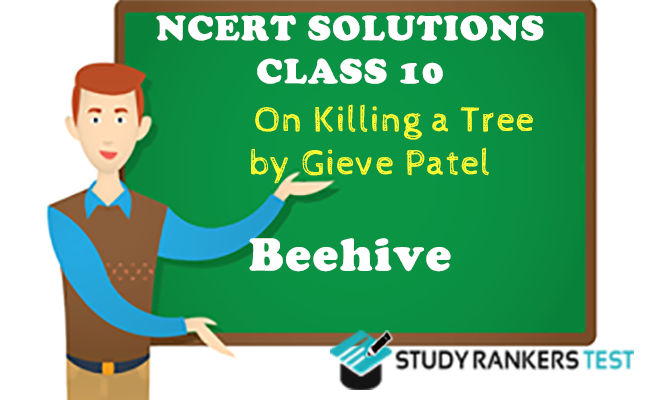 Q1. Can a “simple jab of the knife” kill a tree? Why not?
Answer

No, a simple jab of a knife cannot kill a tree because it takes many years for a tree to grow and rise out of the earth. Moreover, only a chop cannot kill it because it will slowly rise again and grow to its original size.

Q2. How has the tree grown to its full size? List the words suggestive of its life and activity.
Answer

Q3. What is the meaning of “bleeding bark”? What makes it bleed?
Answer

“Bleeding bark” refers to the area on the tree trunk where it has been hit with the axe. It bleeds because the wood cutter has wounded the tree by cutting and chopping it.

Q4. The poet says “No” in the beginning of the third stanza. What does he mean by this?
Answer

In the beginning of the third stanza, the poet has said “No” to lay emphasis on the fact that mere chopping of the tree would not kill it. The tree would grow again and retain its original size.

Q5. What is the meaning of “anchoring earth” and “earth cave”?
Answer

“Anchoring earth” refers to the roots of the tree that lie inside the earth and play the role  of an anchor for the tree to grow. They ensure the security of the tree as they nourish it with  water and nutrients. “Earth cave” refers to the ground on which the foundation of the tree is  laid as it holds the roots and keeps the tree standing tall and protects it from adversities such as heavy rainfall or storm.

Q6. What does he mean by “the strength of the tree exposed”?
Answer

The tree is finally killed by the uprooting of its roots. When the roots, which had anchored  it lying hidden in the earth for years, were dug out, the tree’s strength was exposed and this led  to the death of the tree. It dried up after it had been uprooted.