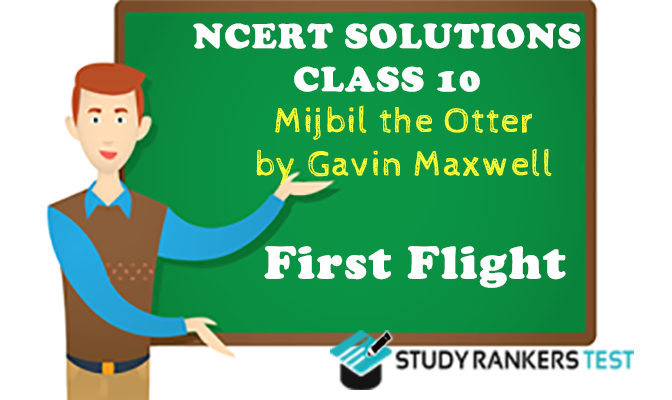 Page No: 106
Oral Comprehension Check
Q 1. What ‘experiment’ did Maxwell think Camusfearna would be suitable for?
Answer
Maxwell thought that he would keep an otter instead of a dog. Camusfearna, ringed by water a very short distance from its door, would be an eminently suitable spot for the experiment.

Q 2. Why does he go to Basra? How long does he wait there, and why?
Answer
He went to Basra, to the Consultate-General, to collect and answer his mail from Europe. He had had to wait there for five days. To start with his mail didn’t reach on time. Then he tried to make a telephone call. This incident is of those days when one had to book an international call 24 hrs in advance. The telephone line was not working properly on the first day. Next day it was some public holiday so it was not working. Finally after a tortuous wait of five days his mail arrived.

Q 3. How does he get the otter? Does he like it? Pick out the words that tell you this.
Answer
When he received his mail, he carried it to his bedroom to read. There, he saw two Arabs and beside them was a sack that twisted from time to time. They handed him a note from his friend saying that he had sent him an otter.
Yes, he liked it. We know this because he uses the term ‘otter fixation’ to refer to his feeling towards the otter. He felt that this otter fixation or this strong attachment towards otters was something that was shared by most other people who had ever owned one.

Q 4. Why was the otter named ‘Maxwell’s otter’?
Answer
The otter was of a race previously unknown to science and was at length named by zoologists Lutrogale perspicillata maxwelli or Maxwell’s otter.

Q 6. What happened when Maxwell took Mijbil to the bathroom? What did it do two days after that?
Answer
When Maxwell took Mijbil to the bathroom, it went wild with joy in the water for half an hour. It was plunging and rolling in it, shooting up and down the length of the bathtub underwater, and making enough slosh and splash for a hippo.
Two days after that, it escaped from his bedroom to the bathroom. By the time he got there, Mijbil was up on the end of the bathtub and fumbling at the chromium taps with its paws. In less than a minute, it had turned the tap far enough to produce some water and after a moment, achieved the full flow.

Page No: 108
Oral Comprehension Check
Q 1. How was Mij to be transported to England?
Answer
Maxwell booked a flight to Paris and from there he would go on to London. The airline insisted that Mij should be packed in a box (not more than eighteen inches square) that was to be placed on the floor, near his feet.

Q 2. What did Mij do to the box?
Answer
The box was lined with metal sheet. Mij didn’t find it comfortable to be there so tried to escape. In its attempt to escape Mij tore into the metal lining of the box. As a result it hurt itself and started bleeding.

Page No: 109
Oral Comprehension Check
Q 3. Why did Maxwell put the otter back in the box? How do you think he felt when he did this?
Answer
As there was no other way to carry Mij to London so the author had put it back into the box. He must have felt pity on the way the otter had hurt itself. Moreover, he must be worried as well.

Q 5. What happened when the box was opened?
Answer
When the box was opened, Mij went out of the box. He disappeared at a high speed down the aircraft. There were cries all around. A woman stood up on her seat screaming that there was a rat. He saw Mij’s tail disappearing beneath the legs of an Indian passenger. He dived for it, but missed. The airhostess suggested him to be seated and that she would find the otter. After a while, Mij had returned to him. It climbed on his knee and began to rub its nose on his face and neck.

Page No: 110
Oral Comprehension Check
Q 1. What game had Mij invented?
Answer
Mij had invented a game with ping-pong ball. He would put the ball at one end of a sloping lid and then grab it as it ran to the other end.

Q 2. What are ‘compulsive habits’? What does Maxwell say are the compulsive habits of
(i) school children
(ii) Mij?
Answer
Compulsive habits are usually strange act or behaviour which a person does without clear reason.
On their way to and from school, children make it a habit to place their feet exactly on the centre of each paving block. Similarly, Mij had made it a habit to jump on to the school wall and go galloping all along its length of thirty yards.

Q 4. What guesses did the Londoners make about what Mij was?
Answer
According to Maxwell, the average Londoner does not recognize an otter. The Londoners who saw Mij made different guesses about who Mij was. They guessed, among other things, that it was a baby seal, a squirrel, a walrus, a hippo, a beaver, a bear cub, a leopard and a brontosaur.

Thinking about the Text
Q 1. What things does Mij do which tell you that he is an intelligent, friendly and fun-loving animal who needs love?
Answer
Mij was an intelligent animal. It invented it own game out of the ping-pong balls. It screwed the tap till water began to flow and then it would play and splash in the water. Though it was aloof and indifferent in the beginning, it soon became very friendly. It formed a special attachment with Maxwell. It responded when Maxwell called out his name. It grew desperate when Maxwell left it in a box and it got hurt while trying to come out of it. After Maxwell took it out, it clung to his feet. It was a fun-loving animal. It enjoyed playing all kinds of games. It would play with a selection of toys, ping-pong balls, marbles, rubber fruit, and a terrapin shell. It required love and affection from Maxwell and it got that readily.

Q 2. What are some of the things we come to know about otters from this text?
Answer
Otters belong to a comparatively small group of animals called Mustellines, shared by the badger, mongoose, weasel, stoat, mink and others. Maxwell’s otter was of a race previously unknown to science and was at length named by zoologists Lutrogale perspicillata maxwelli or Maxwell’s otter. They are found in large numbers in marshes. They are often tamed by the Arabs. It is characteristic of otters that every drop of water must be extended and spread about the place; a bowl must at once be overturned, or, if it would not be overturned, be sat in and splashed in until it overflowed. For them, water must be kept on the move. Otters love playing various games, especially with a ball.

Q 3. Why is Mij’s species now known to the world as Maxwell’s otter?
Answer
Maxwell’s otter was of a race previously unknown to science and was at length named by zoologistsLutrogale perspicillata maxwelli or Maxwell’s otter.

Page No: 111
Q 4. Maxwell in the story speaks for the otter, Mij. He tells us what the otter feels and thinks on different occasions. Given below are some things the otter does. Complete the column on the right to say what Maxwell says about what Mij feels and thinks.

Q 5. Read the story and find the sentences where Maxwell describes his pet otter. Then choose and arrange your sentences to illustrate those statements below that you think are true.
Maxwell’s description
(i) makes Mij seem almost human, like a small boy.
(ii) shows that he is often irritated with what Mij does.
(iii) shows that he is often surprised by what Mij does.
(iv) of Mij’s antics is comical.
(v) shows that he observes the antics of Mij very carefully.
(vi) shows that he thinks Mij is a very ordinary otter.
(vii) shows that he thinks the otter is very unusual.
Answer
(i)He spent most of his time in play.
(iii)I watched, amazed; in less than a minute he had turned the tap far enough to produce a trickle of water, and after a moment or two achieved the full flow.
(v)A suitcase that I had taken to Iraq had become damaged on the journey home, so that the lid, when closed, remained at a slope from one end to the other. Mij discovered that if he placed the ball on the high end it would run down the length of the suitcase. He would dash around to the other end to ambush its arrival, hide from it, crouching, to spring up and take it by surprise, grab it and trot off with it to the high end once more.
(vii)It is not, I suppose, in any way strange that the average Londoner should not recognize an otter, but the variety of guesses as to what kind of animal this might be came as a surprise to me. Mij was anything but an otter.

Q 2. Use a bit of/a piece of/a bunch of/a cloud of/a lump of with the italicised nouns in the following sentences. The first has been done for you as an example.