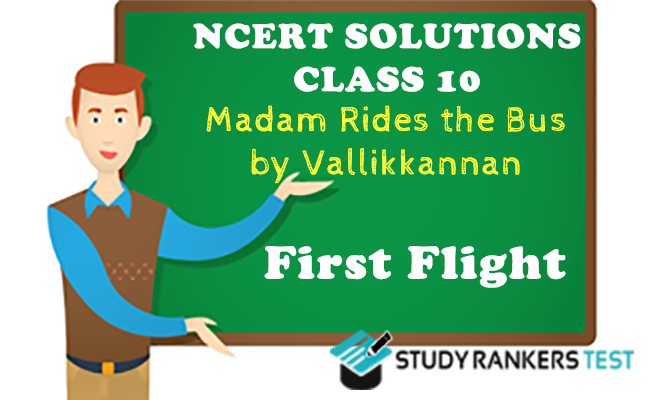 Q 3. What did Valli find out about the bus journey? How did she find out these details
Answer
Valli found out that the town was six miles from her village. The fare was thirty paise one way. The trip to the town took forty-five minutes. On reaching the town, if she stayed in her seat and paid another thirty paise, she could return home on the same bus. She found out these details by listening carefully to the conversations between her neighbours and the people who regularly used the bus. She also gained information by asking them a few questions.

Page No: 122
Oral Comprehension Check
Q 1. Why does the conductor call Valli ‘madam’?
Answer
Valli is trying to behave more mature than her age. She is trying to look overconfident and smart. The conductor is amused at her behaviour and in an effort to tease her calls her ‘madam’.

Q 2. Why does Valli stand up on the seat? What does she see now?
Answer
Valli stood up on her seat because her view was cut off by a canvas blind that covered the lower part of her window. She stood up to look over the blind. She saw that the road was very narrow, on one side of which there was the canal and beyond it were palm trees, grassland, distant mountains, and the blue sky. On the other side, there was a deep ditch and many acres of green fields.

Q 3. What does Valli tell the elderly man when he calls her a child?
Answer
When the elderly man called her a child, Valli told him that there was nobody on the bus who was a child. She had paid her fare of thirty paise like everyone else.

Page No: 125
Oral Comprehension Check
Q 1. How did Valli save up money for her first journey? Was it easy for her?
Answer
Valli saved every coin that came her way. She made great sacrifices by controlling her normal childish urges of having candies, toys and joyrides. This must have been difficult for her. Kids find it very difficult to savour a candy or to enjoy a toy.

Q 2. What did Valli see on her way that made her laugh?
Answer
Valli saw a young cow, whose tail was high in the air, running right in front of the bus in the middle of the road. The bus slowed and the driver sounded his horn loudly. However, the more he honked, the more frightened the cow became and it kept running faster and faster, right in front of the bus. Valli found it so amusing that she had tears in her eyes. At last, the cow moved off the road.

Page No: 127
Thinking about the Text
Q 1. What was Valli’s deepest desire? Find the words and phrases in the story that tell you this.
Answer
Valli’s deepest desire was to ride on the bus she saw everyday. The sentences in the story which depict this are as follows:
“Day after day she watched the bus, and gradually a tiny wish crept into her head and grew there: she wanted to ride on that bus, even if just once. This wish became stronger and stronger, until it was an overwhelming desire.”

Q 2. How did Valli plan her bus ride? What did she find out about the bus, and how did she save up the fare?
Answer
Valli planned that she would take the one o’clock afternoon bus, reach the town at one forty-five, and be back home by about two forty-five. She found out that the town was six miles from her village. The fare was thirty paise one way. The trip to the town took forty-five minutes. On reaching the town, if she stayed in her seat and paid another thirty paise, she could return home on the same bus. She had carefully saved whatever stray coins came her way, resisting every temptation to buy peppermints, toys, balloons, and the like, and finally she had saved sixty paise.

Q 4. Why does the conductor refer to Valli as ‘madam’?
Answer
When the conductor stretched out his hand to help her get on the bus, Valli said commandingly that she could get on by herself, and that she did not require his help. She did not act like a child, but as a grown-up girl and therefore, the conductor called her ‘madam’. When the elderly man called her a child and asked her to sit down on her seat, she replied that nobody was a child on the bus. She kept stressing on the fact that she had paid her fare like everybody else and therefore, she should not be treated differently.

Q 5. Find the lines in the text which tell you that Valli was enjoying her ride on the bus.
Answer
The following lines in the text show that Valli was enjoying her ride on the bus:
(i) “Valli devoured everything with her eyes.”
(ii) “On the one side there was the canal and, beyond it, palm trees, grassland, distant mountains, and the blue, blue sky. On the other side was a deep ditch and then acres and acres of green fields − green, green, green, as far as the eye could see. Oh, it was all so wonderful!”
(iii) “Everyone laughed, and gradually Valli too joined in the laughter. Suddenly, Valli clapped her hands with glee.”
(iv) “Somehow this was very funny to Valli. She laughed and laughed until there were tears in her eyes.”
(v) “Valli wasn’t bored to the slightest and greeted everything with the same excitement she’d felt the first time.”

Q 7. What does Valli mean when she says, “I was just agreeing with what you said about things happening without our knowledge.”
Answer
Valli’s mother said that many things happen around us, but we are usually unaware of them. Valli had gone on a bus ride to town, all alone, and had come back without any harm. She did all this without the knowledge of her mother. Hence, she agreed with what her mother said.

Q 8. The author describes the things that Valii sees from an eight-year-old’s point of view. Can you find evidence from the text for this statement?
Answer
The author has described the things that Valli saw from an eight-year-old’s point of view. She was fascinated by a bus. Watching the bus filled with a new set of people each time was a source of unending joy for her. Her strongest desire was to ride the bus. She saved money by cutting on peppermints, toys, and balloons, and even resisting the temptation to ride the merry-go-round at the fair. When the author describes the bus, the points he stresses on are the colour and look of the bus. It was a ‘new bus’, painted a ‘gleaming white’. The overhead bars ‘shone like silver’. The seats were ‘soft and luxurious’. The descriptions that the author gives when Valli looked outside are also typical for an eight-year-old. The ‘blue, blue sky’ and the ‘acres and acres of green fields − green, green, green’ show the enthusiasm of a kid on looking at different colours. Valli clapped her hands in glee on watching a cow run right in front of the bus. She found it so funny that tears came into her eyes. On the other hand, she was overcome with sadness on her way back when she saw the same cow lying dead. It had been a ‘lovable, beautiful creature’ and later it ‘looked so horrible’. The memory of the dead cow haunted her so much that she refused to look outside the window. These are the typical reactions of a young child.