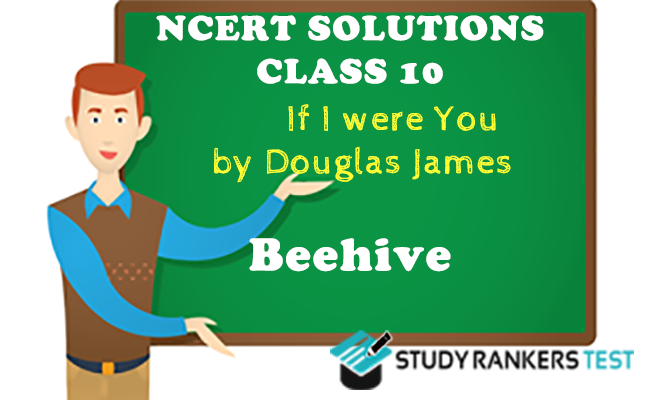 I. Answer these questions.

1. “At last a sympathetic audience.”
(i) Who says this?
(ii) Why does he say it?
(iii) Is he sarcastic or serious?
Answer
(i) The speaker of the given line is Gerrard.
(ii) He says it as he is asked by the intruder to speak about himself.
(iii) He speaks the given dialogue sarcastically.

2. Why does the intruder choose Gerrard as the man whose identity he wants to take on?

Answer
Gerrard looks much like the intruder. The intruder is a murderer. The police are after him. He hopes he can easily impersonate Gerrard escape being caught.

3. “I said it with bullets.”
(i) Who says this?
(ii) What does it mean?
(iii) Is it the truth? What is the speaker’s reason for saying this?
Answer
(i) Gerrard says this.
(ii) It means that when things went wrong, he had used his gun to shoot someone for his escape.
(iii) No, it is not the truth. The speaker says this to save himself from getting shot by the intruder.

Q5. “You’ll soon stop being smart.”
(i) Who says this?
(ii) Why does the speaker say it?
(iii) What according to the speaker will stop Gerrard from being smart?

Answer
(i) The intruder says the line.
(ii) The intruder had been telling Gerrard that he had murdered one man and that he would not shy away from murdering him too. This is because the police could not hang him twice for two murders.

Q7. “A mystery I propose to explain.” What is the mystery the speaker proposes to explain?
Answer
The mystery that Gerrard proposed to explain was the story he made up to dodge the intruder and save his own life. The story was that Gerrard himself was a criminal like the intruder. He asked the intruder why else would he not meet any trades people and be a bit of a mystery man here today and gone tomorrow. The game was up as things had suddenly gone wrong for him. He had committed a murder and got away. Unfortunately, one of his men had been arrested and certain things were found which his men should have burnt. He said that he was expecting some trouble that night and therefore, his bag was packed and he was ready to escape.
8. “This is your big surprise.”
(i) Where has this been said in the play?
(ii) What is the surprise?

Answer
(i) This has been said twice in the play. On the first occasion, it is spoken by the intruder while revealing his plan to kill Gerrard. Secondly, it is spoken by Gerrard before he reveals his fictitious identity to the intruder.
(ii) The intruder’s surprise is his plan to kill Gerrard and take on his identity to lead a secure and hassle-free life. Whereas, Gerrard’s surprise is his fictitious identity, his way of refraining the intruder from killing him.

I. Consult your dictionary and choose the correct word from the pairs given in brackets.

1. The (site, cite) of the accident was (ghastly/ghostly).
2. Our college (principle/principal) is very strict.
3. I studied (continuously/continually) for eight hours.
4. The fog had an adverse (affect/effect) on the traffic.
5. Cezanne, the famous French painter, was a brilliant (artist/artiste).
6. The book that you gave me yesterday are an extraordinary (collage/college) of science fiction and mystery.
7. Our school will (host/hoist) an exhibition on cruelty to animals and wildlife conservation.
8. Screw the lid tightly onto the top of the bottle and (shake/shape) well before using the contents.

Answer
1. The site of the accident was ghastly.
2. Our college principal is very strict.
3. I studied continuously for eight hours.
4. The fog had an adverse effect on the traffic.
5. Cezanne, the famous French painter, was a brilliant artist.
6. The book that you gave me yesterday is an extraordinary collage of science fiction and mystery.
7. Our school will host an exhibition on cruelty to animals and wildlife conservation.
8. Screw the lid tightly onto the top of the bottle and shake well before using the contents.

II. The irony is when we say one thing but mean another, usually the opposite of what we say. When someone makes a mistake and you say, “Oh! That was clever!” that is irony. You’re saying ‘clever’ to mean ‘not clever’.
We use a slightly different tone of voice when we use these words ironically.
Read the play carefully and find the words and expressions Gerrard uses in an ironic way. Then say what these expressions really mean. Two examples have been given below. Write down three such expressions along with what they really mean.
Answer