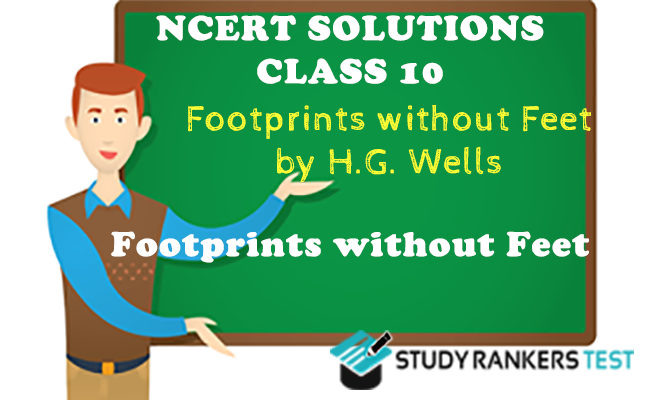 Read and Find Out
Q 1. How did the invisible man first become visible?
Answer
Griffin was completely invisible until he happened to step in some mud, which caused him to leave footprints as he walked. His footprints were seen by two boys, who followed him as long as the prints were visible. On getting rid of them, he went into a big London store to put on some warm clothes. After the store was shut, he got dressed by putting on shoes, an overcoat and a wide-brimmed hat. This made him visible to the people who came to work at the store the next day.

Q 2. Why was he wandering the streets?
Answer
Griffin was a lawless person. His landlord disliked him and tried to get rid of him. In revenge, he set fire to the house. He had to remove his clothes to get away without being seen. This was why he had become a homeless wanderer—without clothes and money.

Page No: 28
Q 1. Why does Mrs Hall find the scientist eccentric?
Answer
The arrival of a stranger at an inn in winter was in itself a strange occurrence. In addition, the stranger had an uncommon appearance. In spite of Mrs Hall’s attempts to be friendly, he would respond in a cold manner. He told her that he had no desire to talk, and that all he wanted was solitude. He did not wish to be disturbed in his work. For all these reasons she regarded him as an eccentric scientist.

Q 2. What curious episode occurs in the study?
Answer
A clergyman and his wife were awakened by noises in the study very early in the morning. Creeping downstairs, they heard the chink of money being taken from the clergyman’s desk. He and his wife looked under the desk and behind the curtains, and even up the chimney. There wasn’t a sign of anybody. Yet the desk had been opened and the housekeeping money was missing.

Q 3. What other extraordinary things happen at the inn?
Answer
The landlord and his wife surprised to see the scientist’s door open. Usually it is shut and locked and he becomes furious if anyone enters his room. The opportunity seems too good to be missed. They peep round the door, see nobody and decide to investigate. The bedclothes were cold, showing that the scientist must have been up for some time. All of a sudden Mrs. Hall heard a sniff close to her ear. A moment later the hat on the bed post leapt up and dashed itself into her face. Then the bedroom chair became alive. Springing into the air it charged straight at her, legs foremost. As she and her husband turned away in terror, the extraordinary chair pushed them both out of the room and then appeared to slam and lock the door after them. Mrs. Hall almost fell down the stairs in hysterics. She was convinced that the room was haunted by sprits and the stranger had somehow caused these to enter into the furniture.

Page No: 31
Q 1. “Griffin was rather a lawless person.” Comment.
Answer
It is rightly said that Griffin was a lawless person. He was not a law abiding citizen. A person who follows law and order of the country can not think of damaging other’s property. But Griffin set fire to the house and became a homeless wanderer. He also robbed a shopkeeper of all the money he could find. He stole the housekeeping money from the clergyman’s desk. Griffin also attacked Mrs. Hall when she entered his room. All these activities and instances prove that he was really a lawless person.

Q 2. How would you assess Griffin as a scientist?
Answer
After repeated experiments, Griffin had discovered how to make the human body transparent. This was a big achievement. However, he misused his discovery for personal gains and for hurting others. Thus, though he can be termed as a brilliant scientist, he was not a noble one.