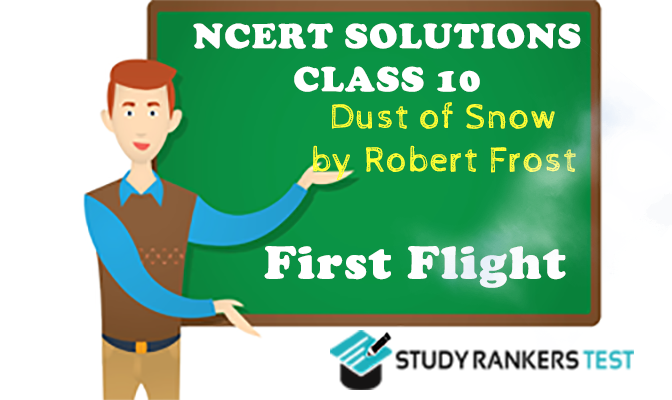 Thinking about the Text (Page 14)

1. What is a “dust of snow”? What does the poet say has changed his mood? How has the poet’s mood changed?

A “dust of snow” means small particles of snow. The poet was in a sad mood. But the falling of the dust of snow on him changed his mood. Now he saw the beauty of nature and’appreciated it

2. How does Frost present nature in this poem? The following questions may help you to think of an answer.

(i) What are the birds that are usually named in poems? Do you think a crow is often mentioned in poems? What images come to your mind when you think of a crow?

(ii) Again, what is “a hemlock tree”? Why doesn’t the poet write about a more ‘beautiful’ tree such as maple, or an oak, or a pine?

(iii) What do the ‘crow’ and ‘hemlock’ represent — joy or sorrow? What does the dust of snow that the crow shakes off a hemlock tree stand for?

(i) Generally, birds which are beautiful or which have a sweet voice are usually named in poems. Some of such popular birds arc cuckoo, mynah, peacock. parrot, etc. A crow is rarely mentioned in poems. Its song is jarring and it is considered ominous. But Frost is a poet of nature. He considers every bird worth mentioning in his poems. When we think of a crow the image of sadness comes to our mind.

(ii) ‘A hemlock tree’ is a poisonous plant with small white flowers. The poet mentions this plant or tree because the crow, as well as the plant, match the poet’s mood.

(iii) The ‘crow’ and ‘a hemlock tree’ represent sorrow and evil. They match the poet’s mood. The dust or snow stands for something joyful. So the falling of the snow on him changed his mood.

3. Have there been times when you felt depressed or hopeless? Have you experienced a similar moment that changed your mood that day?

Yes. there have been many times when I was in a bad mood. I was sad or depressed. But something always changed my mood into that of joy. Once I felt sad as I had a quarrel with one of my friends. But then I went into the garden. I heard the song of a cuckoo bird. That sweet song changed my mood.