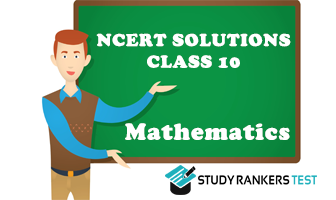 The NCERT solutions for Mathematics Textbook as prescribed by CBSE Schools is strictly based on latest pattern of Central Board of Secondary Education for the Board Exams 2020. Maths is one of the most important subject for Class 10 students. NCERT Textbook of Class 10 build the basic fundamental which will help you at higher levels. If you want to opt Science stream in upper classes then you must clear all the concept and doubts. Solving NCERT Solutions for Class 10 Maths will memorize all the important formulas and theories that are important for the examination. We are committed to provided most accurate and detailed answers of every NCERT questions. These ncert solutions are simple and prepared in a way so that you can easily grasp the concepts related to each question. If you are facing any type of problem then you can take help from here. You can use the links provided below to start reading you problematic chapter.

List of all chapters of NCERT solutions for class 10 Maths

These NCERT Solutions are prepared by our expert Maths Faculty and accurate and detailed. These will be helpful in revising important formulas. We have added figures wherever necessary so that you can understand it easily. Through these solutions students can strengthen their problem-solving skills. Students can understand the problem easily and in less time.

The first chapter of Class 10 Maths is Real Number and the textbook ends with Probability. We have provided all the important details of each chapter below.

There are four exercises in the chapter. This chapter starts with Euclid’s division lemma and Algorithm. A lemma is a proven statement used for proving another statement. An algorithm is a series of well defined steps which gives a procedure for solving a type of problem. For any two given positive integers ‘a’ and ‘b’ there exists unique whole numbers ‘q’ and ‘r’ such that a = bq + r, where 0 ≥ r < b Here, a = Dividend, b = Divisor q = Quotient, r = Remainder. This is Euclid’s division lemma. Euclid’s Division Algorithm is a technique to compute the HCF of two positive integers ‘a’ and ‘b’ (a > b). We will revise our previous concepts of rational and irrational numbers and their decimal expansion. We will study Fundamental Theorem of Arithmetic where every composite number can be expressed as a product of primes, and this factorisation is unique, apart from the order in which the prime factors occur.

An equation which can be put in the form ax + by + c = 0 where a, b and c are real numbers (a, b ≠ 0) is called a linear equation in two variables. This chapter has a total of seven exercises which have various problems related solving linear equations through algebraic method, graphical method, elimination and substitution method.

An equation of the form ax2 + bx + c = 0, where a, b, c are real numbers, and a ≠ 0, is called a quadratic equation in the variable x. There are four exercises in this chapter.  We will learn various methods of solving quadratic equation such as by factorisation method, completing the square, finding the nature of roots.

An arithmetic progression is a list of numbers in which each term is obtained by adding a fixed number to the preceding term except the first term. The fixed number is called the common difference, which can be positive, negative or zero. The common difference of an A.P. can be obtained by subtracting any term from its following term. In this chapter, we have to find the nth terms and the sum of n consecutive terms.

There are various questions given in this chapter in total six exercises on the basis of the properties of triangles. Here we will mainly discuss the congruency and similarity of plane figures. Two geometric figures are said to be congruent, if they have the same shape and the same size. Two geometric figures having the same shape (but not necessarily the same size) are called similar figures.Two congruent figures are always similar but two similar figures need not to be congruent.

Coordinate plane and coordinate of a point are the plane containing two mutually perpendicular lines X’OX and Y’OY intersecting each other at O is called coordinate plane. X’OX and Y’OY are called xaxis and y-axis respectively. There are four exercises in the chapter. In most of the questions, you have to finde the distance between the two points whose coordinates are provided and the area of a triangle formed by three given points.

Chapter 9 – Some Applications of Trigonometry

A Circle is a closed shape with a certain set of points in a plane at a specific distance from the center of the circle. There are only two exercises. A tangent to a circle is a line that touches the circle at only one point. The tangent at any point of a circle is perpendicular to the radius, through the point of contact.

In this chapter, we are finding mean, median and mode which are measures of central tendency that is numerical representatives of the given data. Cumulative frequency of a class is the frequency obtained by adding the frequencies of all the classes preceding the given class.