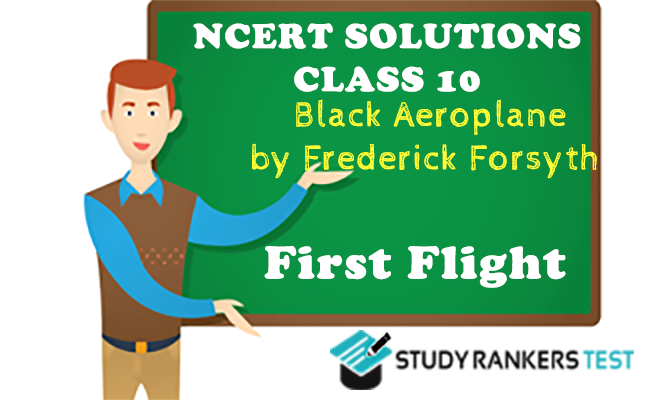 Q1. “I’ll take the risk.” What is the risk? Why does the narrator take it?
Answer
The risk was to fly through the black storm clouds. The narrator took the risk because he wanted to reach Paris to celebrate Christmas with his family.

Q2. Describe the narrator’s experience as he flew the aeroplane into the storm.
Answer
As he flew into the storm, everything went black. It was impossible to see anything outside the plane. It jumped and twisted in the air. When he looked at his compass, he saw that it was turning round and round. It was dead. Along with it, the other instruments, including the radio, were also dead. Suddenly, he saw another aeroplane. Its pilot waved at him, asking him to follow. He was glad to find a helper. He was using his last fuel tank and there was only enough fuel to fly five or ten minutes. Then, the other pilot started to go down and he followed. He suddenly came out of the clouds and saw the runway, on which he then landed his plane safely.

Q3. Why does the narrator say, “I landed and was not sorry to walk away from the old Dakota…”?
Answer
He was delighted to land safely out of dark stormy clouds, therefore, he was not sorry to walk away for his plane. He felt bad when he was not able to thank his guide, his mentor who saved him from frightening situations, but he was so happy after landing that he didn’t feel sorry for not being able to thank the guide pilot.

Q5. Who do you think helped the narrator to reach safely? Discuss this among yourselves and give reasons for your answer.
Answer
Probably, it was the narrator’s own self that helped him through the storm. There was no other plane in the storm as the woman at the control centre could see only his plane on the radar. Also, no other plane was flying that night. In his fear, he might have been hallucinating. He was a good pilot, and it might have been his own self that came to his help.

1. Try to guess the meanings of the word ‘black’ in the sentences given below. Check the meanings in the dictionary and find out whether you have guessed right.
1. Go and have a bath; your hands and face are absolutely black__________.
2. The taxi-driver gave Ratan a black look as he crossed the road when the traffic light was green. __________
3. The bombardment of Hiroshima is one of the blackest crimes against humanity. __________
4. Very few people enjoy Harold Pinter’s black comedy.__________
5. Sometimes shopkeepers store essential goods to create false scarcity and then sell these in black. __________
6. Villagers had beaten the criminal black and blue. __________

3. We know that the word ‘fly’ (of birds/insects) means to move through the air using wings. Tick the words which have the same or nearly the same meaning.

Answer
The words which have the same or nearly the same meaning as ‘fly’ are as follows:
swoop, flit, float, dart, soar, hover, sail skim, glide, flutter