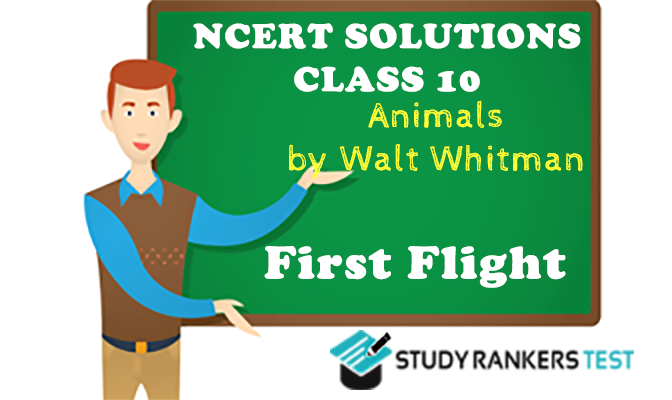 Q1. Notice the use of the word ‘turn’ in the first line, “I think I could turn and live with animals…” What is the poet turning from?
Answer
The poet is turning away from living with other humans as he finds them complicated and false. He would rather live with animals that are self-contained and non-complaining.

The poet has drawn three comparisons between humans and animals.
(i) Humans sweat and work to make a living and later whine and sulk about the amount of work they have to do to survive. Animals, on the other hand, do not whine about their condition.
(ii) Humans lie awake at night and cry for the wrongs they have done. Animals do not weep for anything they do and sleep peacefully.
(iii) Finally, humans make each other sick by discussing their duties to God. However, animals do not have any god and they live and survive without any prayers or fasts.

Q4. What are the ‘tokens’ that the poet says he may have dropped long ago, and which the animals have kept for him? Discuss this in class. (Hint: Whitman belongs to the Romantic tradition that includes Rousseau and Wordsworth, which holds that civilisation has made humans false to their own true nature. What could be the basic aspects of our nature as living beings that humans choose to ignore or deny?
Answer
The token that the poet says he might have dropped long ago, and which the animals have kept for him, is his true nature as a human. While humans came close to civilisation, they gradually moved away from their true nature. The natural instincts that humans had and the innocence with which they lived and helped each other have been left behind somewhere. As they got near civilisation, they chose to leave behind the virtues of kindness, sincerity, unselfishness, joy, satisfaction, respectability and sharing. They took to vices such as greed, selfishness, desire to capture everything, and other such inhuman characteristics. Animals have carried forward the real instincts and characteristics, which the poet looks at and tries to remember where he had negligently lost his true nature.