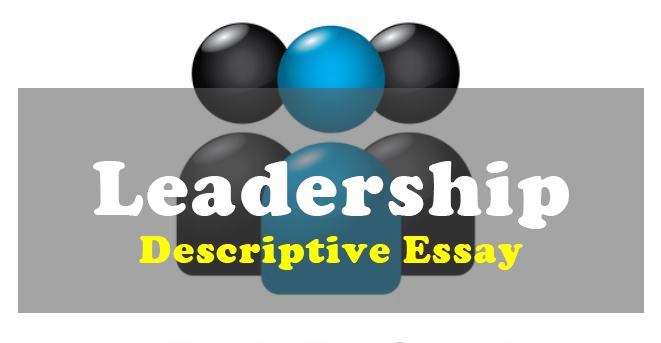 Ours is an organized society and any organization, for the accomplishment of its objectives, requires efficient leadership. Efficient dedicated leadership and resources, both natural and human, are requisites for a nation to develop and progress. The days when people could be driven are long gone and today people are led. An educated and sophisticated group of people need an intelligent and forward-looking leader. The students have their teacher to follow, the family, the father, and the nation, its political leader.

The leader is the symbol of unity. The British Crown is symbolic of the links that bind the members of the Commonwealth. It is often leadership that strengthens an organization and makes it vigorous and viable. Often, when a leader is discredited, the organization is thrown into a minor tumult and rival leaders vie to checkmate one another. Where the leader is not acceptable to the majority. the members will he divided, and a fragmented organization will be an ineffective one.

In school. the Principal is the leader of the teachers and the students. Where he fails, the mental, physical and moral welfare of the students will he neglected. The teachers look up to their Principal for guidance and leadership. Having won the confidence of the teachers, lie is able, with their help, to create an ethos which is so vital to the effective functioning of the school. In the church the congregation receive their spiritual guidance from the priest. At home, the head of the family would be able to foster in the children the virtues that he displays.

Leadership should he dynamic and forward-looking. The leader should be able to adapt his policies to the changing circumstances and find new solutions to old problems. When he is conservative and unwilling to change because of his traditional beliefs, he becomes ineffective as a leader and loses his hold on his members. The smug satisfaction which a leader enjoys when he comes into the lime-light should not make him complacent and idle. By his dynamism, new followers are to be won and opponents transformed into friends and followers. He should be quick to abandon out-moded and decadent ideas.

A Leader should be patient and tactful. A leader in a hurry often fails. A leader should he aware of the susceptibilities of his people and should not jibe at their weaknesses. The measures that he adopts should not run counter to their beliefs and customs for the success of any plan depends on the involvement of the majority of the members. Arbitrary decisions can lead to failure. A leader should be resourceful and must be capable of sound judgment. He must be tolerant of the weaknesses of others and should be prepared to accept criticism.

Leadership should be efficient and intelligent. A good academic qualification is a “sine qua non” of leadership. The intellectual acumen that usually goes with a high standard of education is necessary to find solutions to the many problems that he meets with. Almost all leaders have the gift of the gab. With the ability to speak fluently and impressively he is able to win over his members and influence their thinking.

Leadership should not be corrupt. A mercenary is easily spotted and isolated. Corruption precedes decay and disintegration. The leaders that shine forth in the political horizon today are those who have forsaken selfishness and self-interest. To be admired more at home the leader should be admired abroad.

Bereft of an efficient, honest. intelligent leader, a nation falls divided and an association or an organization becomes static. Where the very existence is threatened, a dynamic and efficient leader can create calm out chaos and help the nation to progress.